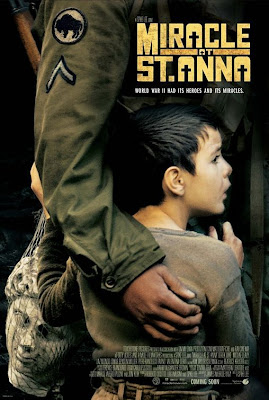 Yesterday I went to the BFI (British Film Institute) to see the first European screening for the film Miracle at St.Anna, a fictional film directed by the famous black American Director Spike Lee, the film was about a black American army regiment (called Buffalo) that fought in Italy during the Second World War.
The film starts off in the 80's where we see an old man commit a murder, it then goes back to his past in the Buffalo army regiment were we come to understand its connection with future events. Trying not to give much away, the story follows 4 stranded black soldiers and a stray Italian boy with a harrowing history; they all find refuge in a small Tuscan village proclaimed by the Germans.
Generally I’m not keen on war films. I find the concept of war to be heinous, indoctrinated men and women lay down their lives for a false cause or belief, so I find it hard to watch these types if films on the big screen.
Miracle at St.Anna was no exception to this; in fact I actually found it harder seeing an all black army get slaughtered and what’s worse was that it wasn’t just the enemy heading the attack, in one of the early flight scenes we see how the white American military leader have no regards for his blacks soldiers lives actually bomb his own men!
What I did find interesting was the German propaganda strategies directed at the black soldiers, not only did the men have to contend with posters of evil and animalistic looking black American soldiers but at one point in the film we see the Germans make a radio broadcast in English questioning the black American soldiers of their presents in the war when their own country still treats them as second class citizens.
This was a very powerful scene and posed a valid question considering the Jim Crow law in American existed till 1965, which is 20 years after the Second World War ended!
I haven’t watched many Spike Lee films, though I have read many critics on his work.  As much as I enjoyed the film over all, there were elements that I found typical of commercial films, namely racial and gender stereotypes.
In the film, when the soldiers arrive in the Tuscan village and find refuge in a household headed by a young feisty Italian woman, it was obvious that she was going to sleep with one of the black soldiers and considering their reaction to this female character it was also obvious that there would be some bitter fall out between the men because of this. Not to disappoint we are exposed to scenes of (unnecessary) nudity from the female character, a graphic sex scene and a betrayal fight between two of the soldiers!
As for the racial stereotyping of the four black male characters, it was the usual formula, you had the sexy, light skinned, bad boy who generally looks out for number one; then you have the sergeant who despite his position is unable to take control in his own life and looses out on his Italian love interest. The main character who we meet at the beginning of the film in his elderly age his is the sensible one, well educated, religious with a good moral balance; with the most typical of characters being the fourth soldier the Southern BFG, big and tall he was innocent minded, god fearing and superstitious, he was the one sprouting old saying and bible scriptures (think Green Mile).
Despite these little things, I did really enjoy the film.  The main characters were endearing and the story very charismatic. I’m not one to cry for a film but I found it exceptionally hard not to coming to the end (I managed to suck it up since I was with company!).
Also the film highlighted historical points I’d like to later reference, such as the German propaganda tactics and posters, another interesting point raised was that despite  being ’s allies during the war the film, showed the Italians to be rebellious and equally prone to casualties at German hands!
I would definitely recommend watching the film, especially if you have the chance to see it on the big screen.
I’m not sure I’ll be able to hold back the tears if I were to watch it again but I have to own it on DVD, as to me it is definitely one of those films you need to have in your collect.