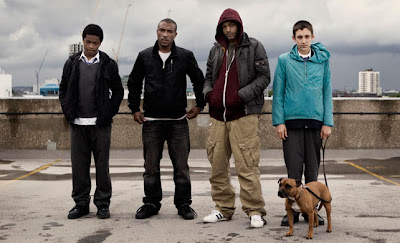 Yesterday saw the last instalment of the four part urban drama Top Boy on Channel 4.  The drama stared rapper and rapper turned actor Ashley Walters (who has a reputation for staring in urban cult films).
Top Boy described by the Channel 4 website as “about young lives lived on the edge in east - an honest and gripping rendition of inner-city drug and gang culture”, seemed reminiscent of the 1991 American film with Wesley Snips and Ice T, only with a backdrop!

I’m not denying that such events occur on streets, though whether the drama was created with the intent to address an issue or simply to continue to perpetuate the stereotypical imagery of black family life, culture and masculinity was unclear!

The storyline being how local drug dealers are recruiting young impressionable boys in the neighbourhood to act as foot soldiers to sell and transport their drugs. Ra’Nell and Gem, the two main younger characters, are both 13 years old and best friends, they are also recruited by local drug dealer Dushane (played by Walters) and his power crazed right hand man Sully (played by Kano).

We see that asides from the cool factor and money, the appeal for joining a gang is also the false sense of security and friendship, this was shown in the way gang members addressed one another with the term ‘fam’ (short for family).
As much as this term maybe used on the streets, I thought the program using the term was a direct attack on the said break down of the black family unit, since we see that Ra’Nell came from a broken home.
We also learn through the story that Ra’Nell’s father was abusive to his mother, a situation which led to Ra’Nell stabbing his father to protect his mother; she then goes on to have a nervous break down and spends most of the 4 part drama on a mental ward.  This is shown as the main reason Ra’Nell has the opportunity to get involved with Dushane and his crew since he lacks parental guidance.

Personally I found the drama to be quite disturbing to watch and being quite squeamish the extreme violent and graphic scenes of shooting, stabbing and torture didn’t sit well with me. Also at times the program acted like a criminal how to manual, showing viewers how to grow weed and how to carry drugs so that it goes undetected by the police.

As much as I though the drama served only to re-enforce black masculinity with crime, violence and obsession for money & power; I did find one thing about the storyline surprisingly interesting, they showed white men to be at the top of the inner city drug hierarchy.
This is interesting because these white men were the ones supplying the drugs and guns to the black dealers, a fact that is over looked when the news headlines report of another gang related murder or attack!

The program is what it is, though as much as it maybe art imitating life, we must remember that life also imitates art and for many black youths (boys & girls alike) the television and media are where they establish their sense of self.
I’m not saying such dramas and films shouldn’t exist but until the media is responsible enough to broadcast a variety of different and more positive narratives of the black condition, its very hard for black people to be seen by either themselves and others as anything more then criminals and looters!