The UN Remembers The Slave Trade 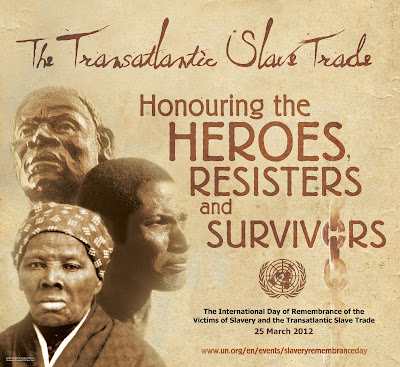 Found out about this in passing, I've never heard about this remembrance day before and I'm not sure if its just an American thing since the remembrance events scheduled this week are all held in New York.
Very interesting none the less and definitely a day worth public remembrance in the UK (and Europe), wonder how we can get this to happen over here?

See below insert taken from the UN's website regarding this event, link also below...

The tragic transatlantic slave trade, which marked one of the darkest chapters in human history, lasted for 400 years, despite a spirited resistance by the millions of enslaved peoples.
The transatlantic slave trade, often known as the triangular trade, connected the economies of three continents. It is estimated that between 15 to 20 million people, men, women and children, were deported from their homes and sold as slaves in the different slave trading systems.
The yearly remembrance serves not only as an opportunity to reflect on those that suffered and perished at the hands of slavery, but also as an occasion to raise awareness to the world’s youth about the dangers of racism and prejudice.
This year’s theme of "Honouring the Heroes, Resisters and Survivors" of the Transatlantic Slave Trade aims to pay tribute to the brave men and women who valiantly fought against the inhumane practices of slavery.