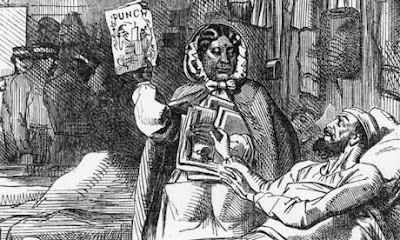 Right so according to Lynn McDonald, a Canadian Sociology professor and Florence Nightingale enthusiast, Mary Seacole doesn't deserve to be recognised for her medical services during the Crimea war especially not with a statue that will tower over that of recognised white British nurses Florence Nightingale and Edith Cavell. Writing for the Guardian's 'Comment is Free' page, McDonald ridicules Mary Seacole and her achievements favouring the legacy of Florence Nightingale.
I haven't heard such pretentious ignorance since David Starkey's infamous BBC Newsnight comments during the UK riots. What is with these 'distinguished' and 'educated' types asserting their ignorant, racist and classist views onto the rest of us?

McDonald believes honouring Mary Seacole is doing a disserve to Florence Nightingale and goes on to say that Seacole wasn't a proper nurse, she also brands Seacole as a opportunist who profited from servicing war soldiers and that the told history of Seacole is all 'whoppers'. To add further insult to injury she has the cheek to tell black people Seacole isn't worth commemorating as being mixed race (Seacole was half Jamaican and half Scottish) she didn't like to acknowledge her black roots!
This isn't true, there are many well documented historical examples of Seacole acknowledging and showing respect for black people. Though considering that Seacole was born during slavery were sickeningly the ability to 'pass off for white' would have allowed her to escape the horrid conditions of black (slave) life and offered economical opportunities, makes it understandable that she would down play her black lineage.

While yes Seacole was not a 'proper' nurse McDonald fails to mention that either really was Nightingale. Nightingale did briefly trainned in Germany though nursing was not a regulated or extensively trained profession since the role carried little credibility in Britian still Nightingale's stint in the Crimea. Also missed by McDonald was how Seacole who has learnt herbal medicine from her mother was rejected several times to join Nightingale's team of nurses and also rejected to work in the Crimea hospitals beacuse she was black.
Seacole, who had been a successful business woman in Jamaica, travelled to the Crimea at her own expense and established a hotel close to the front line selling food and drink to the British soldiers with which the finance was used to provide the medical treatment she offered the soldiers. While Nightingale is known as the 'lady with the lamp' for checking on her patients at night, Seacole provided a very personal and attentive care with many of the soliders referring to her as mother Seacole.

This it is not a competition, the two women’s accomplishments are very different much due to their race and social positioning, as a middle class white woman Nightingale had to overcome the social stigma of 'a woman’s place is in the home' where as Seacole despite hash racial inequality and set backs still managed to persuaded her ambition of helping people. Both women have contributed to British history making Seacole just as deserving of recognition as Nightingale.
As a black Brit, Canadian McDonald's article deeply offends me, who gave her the right to question a British institutes decision to honour a much deserving historical figure? The article clearly bias exposes McDonalds racial prejudices and lacked any academic integrity; while I was pleased to see from the comments that most disagreed with McDonald, sadly there were still a few comments that accepted her dribble using her academic background to validate her awful view.

Link to the offending article:
Statue of 'nurse' Mary Seacole will do Florence Nightingale a disservice, guardian.co.uk/commentisfree