All Eyes on London: The 2012 Olypmic Opening Ceremony 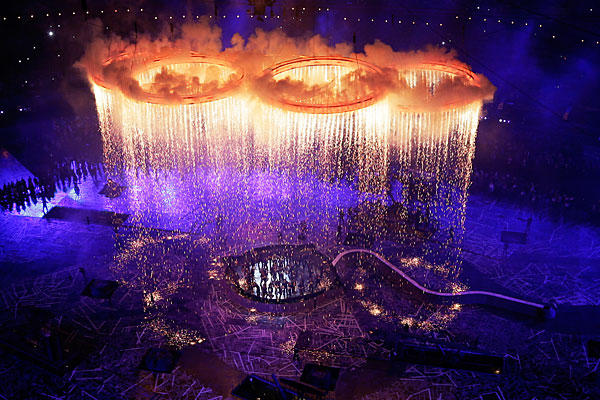 It is estimated that over 1 billion viewers world wide tuned in to watch London's Olympic opening ceremony.
With last Fridays performance nothing short from spectacular, Britain's history was played out whimsically, starting with its rural days, to the industrial revelation to present day.

I must admit I was both shocked and pleased to see that Windrush was acknowledge in Britain's history (this was when Britain experienced a mass immigration from the Caribbean's during the 50's) and will also admit that I found some enjoyment watching the ceremony. The performance seemed 'multicultural' enough for me to not have much to complain about though there were parts of the performance that didn't quite sit well with me. Like the fact that, while the performance acknowledged Black people in Britain, why wasn't the presence and contributions of the countries Chinese, Indian or Turkish communities acknowledged?

I also found it unsettling that the modern British household was represented with a dual racial family with the dad being black and the mother being white. - Is this really the typical British family!? - With the black British community making up less the 3% of the country's population, dual race coupling is anything but 'typical' especially when many (if not most) parts of the UK lack in ethnic diversity.
While yes the mixed race ethnicity is becoming one of the fastest growing racial group in Britain (particularly of black white mix), overall this ethnic group make up only a very small percentage of the total population. I also found it very ironic that this image of a dual race family was used since racial mixing is generally said occurs more in working class communities, whom are also said to not the typically follow the norm of a 2.4 family model.

The ceremony depicted Britain and life in Britain as being very peachy. While I wouldn't say matches the reality it was obvious and expected that the ceremony would go down the route of drawing attention to what is said to make Great Britain 'great'. The ceremony embodied most of what the world perceive Britain to be as apposed to what Britain actually thinks of itself. I say this in relation to the performance's inclusion of the NHS, with pretty lady nurses attentively dotting on the young children in beds arranged to shape a moon.
While I agree that the NHS is one of Britain's greatest accomplishments inspiring a replications elsewhere in world such as the USA and the current Obama care. Though considering we are currently fighting to save the 'failing' NHS I found it somewhat hypocritical to have included it in.

I couldn't help feel while watching that to much extent Britain needs to practise what it preaches. Considering the country's poor race relations with it ethnic minorities, I found it both ironic and hypocritical for the ceremony to have had celebrated the black presence and its music when only last year they blamed us for 'turning whites black' and for senselessly rioting. - Oh what a difference a year makes... and a lot of international attention!

What were your thoughts on the opening ceremony?
Labels: Culture Race and Identity Sport Television World Affairs