Senseless Sexism In Phones 4 U Ad 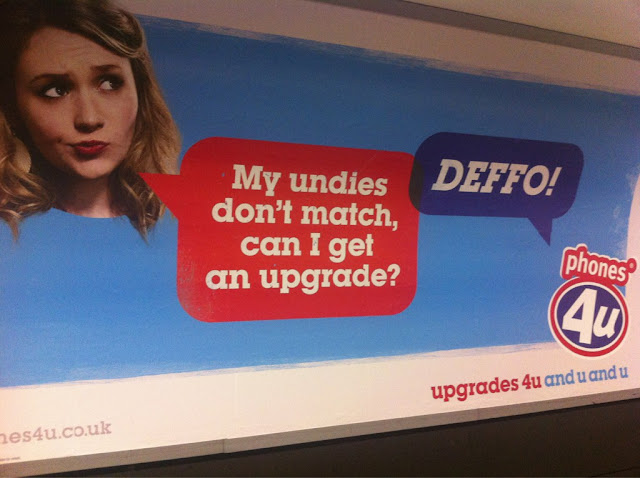 On my way home from a recent night out, I spotted this mindless sexist ad for Phones 4 U on the underground. Capturing it on my phone I tweeted this nonsense ad (see tweet below), though interestingly some of my male and female friends couldn't see the ad's sexist connotations.

I'm not going to say that as a woman I was deeply offended by the ad because I wasn't, but it is senseless and unnecessary sexist and for this I feel the need to call it out. Clearly we are all too used to being feed 'above the belt' sexist imagery in mainstream culture that we have built up a tolerance for it.

For those that don't see why the ad is sexist, the ad implies that it is part of womanhood to wear matching underwear. And that the girl in the ad, who defies this rule should essentially be ostracized for it, though Phone 4 U are still willing to accept her for an upgrade on her phone!

I did say the ad was senseless, though while it may seem that I'm 'reading into it a bit', this is exactly what the advert is implying if you dear to think about it and not simply take it for face value!
I won't lie their are bigger issues to be fought in the name of feminism, though it’s these small and subtle forms of everyday sexism which makes the fight to some extent a losing battle. I mean if we are consistently consuming subtle sexist ideologies, then surely feminist politics can never truly be implemented and women can never truly be liberated (men too)!!

Basically any form of sexism is unacceptable no matter now blatant or subtle it is! And we the public need to stop accepting these sexist images so willingly and question what our media is feeding us and our future generations!

Phones 4 U actually saw my tweet and got back to me with an apology, see below. Though it’s not me they owe an apology too. Sexist ideals affects the lives of all woman and children, even men are disenfranchised under patriarchy! If they were really truly sorry for perpetuating sexism they would take the ad down... didn't think so!