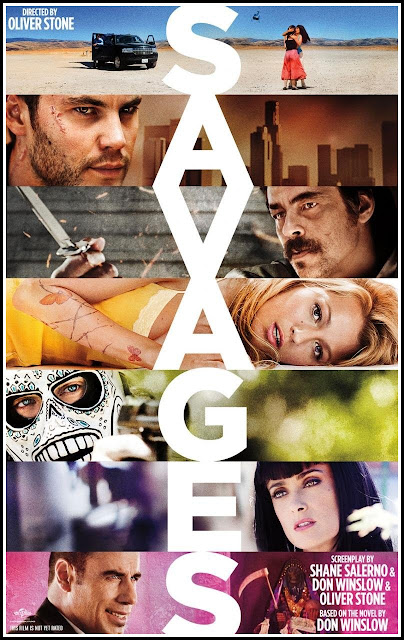 With a fab 'A' list cast and lots of great reviews Savages fell disappointingly short of my expectations. Actually if I'm honest it didn't really recover from it's opening sex scene which then evolved into a love triangle between a half naked young blond called O (short for Ophelia) and her best friend drug dealer lovers whom are quite happy to share the same woman. Plus more graphic sex scenes.

Not to give too much of the plot away but the story follows O and her high end drug dealer boyfriends encounter with Mexican drug gangsters. To my surprise Salma Hayek's character was the drug kingpin with Benicio Del Toro being her right hand man; Travolta plays a dirty government official, with the films ending being very messy.

The film contained a fair bit of action and a few graphic and gruesome scenes, though the problem I had with the film was how rubbish Hayek's drug lord character was. This has nothing to do with Hayek's acting, shes a really good actress, but sadly the female drug lord character was flawed by all that oestrogen making her too emotional and surving as her big weakness. Beacuse of this we see her struggle to manage her drug empire (and repuation) with that of her 'female role' as mother which obviously comes first to every woman. This leads for mutiny within her ranks which causes the deminise of her murdered husbands drug empire.
Sexist, yes very since their have been lots of equally notorious and violent female drug lords, past and present. Though while I am in no way condoning this to be seen as 'one of our achievements'; I am saying that it was not necessary for Hayek's character to have been so weak. I also very much doubt the film would have ended the same way had her character been male.

For me this really let the film down though I'm sure not everyone will see it the same way. Maybe it might be worth reading the book as the film is based on a novel by Don Winslow and takes the same name. This might also help me understand the ending better as the whole love triangle story ending was kind of confusing and I am still unsure what really came of it.

I wouldn't recommended the film but I certainly wouldn't try and convince you not to watch it.
Labels: Film Popular Culture Sexism