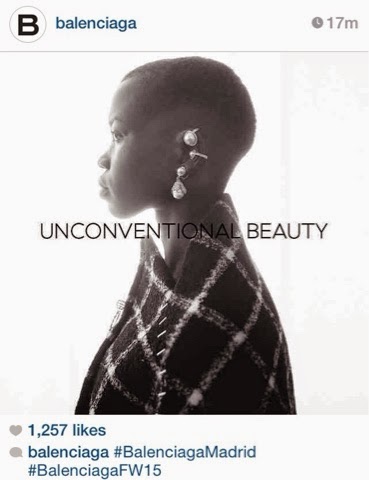 I know it's been a while since I last blogged, but looks like I'm back!!

And I return with a racially suggestive image posted on Instagram this morning by Spanish fashion house Balenciaga (see above).

I'm not gonna jump to any conclusions on this BUT the image's caption in conjunction with a image of a black female with prominent "non-western" features falls into racist territory. Though why I'm not quick to make assumptions is that this is of course a piece of advertising and it's also likely that the caption is intended to describe the range (clothes and jewellery) that is being promoted and that the model is wearing. Though saying this doesn't get them off the hook that easily!

While I appreciate ethnic diversity in fashion, I have to wonder whether the black model was casted intentionally for her 'unconventionality'. I mean would this image still seem like "unconventional beauty" had the model been white?

Might seem like I'm reading into it - I am, that's what I do - but contemporary racism isn't always black & white, and with culture race holds particular value. Personally, I think the use of a black model was intentionally done to emphasis the captions notion, though I do not think anyone was intentionally being racist but playing on the ideas of blackness that are already held within contemporary popular culture.

The image is beautiful, the caption is ignorant and lazy. Do better fashion, do better Balenciaga!

What do you think about the image?