Is It Just Me?: Instagram, Art and Causal Racism 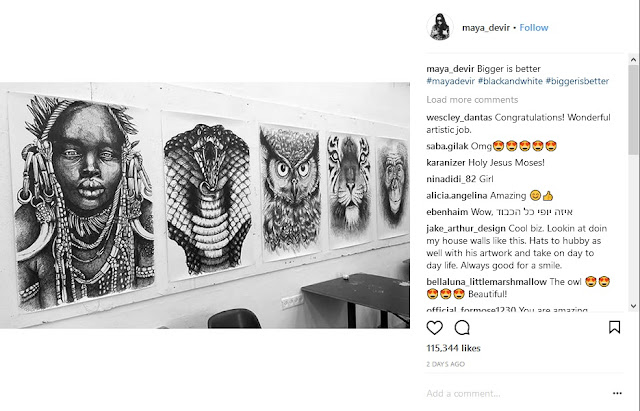 "Is it just me or is this art series racist?"

Scrolling through my Instagram feed I read a post, from an artist I follow, announcing his wife's Instagram arrival. Considering that said artist has made a following (my follow included) from his cartoon drawings of him and his wife's relationship I was interested to see what her gram account would offer. On inspection I was impressed to learn she's an artist too and was drawn to these beautiful hand drawings she had posted. The actual post is a series of four images. The first being of her and an image of an owl she's drawn, but I became concerned and somewhat disturbed by the second image (and third) which showed the art to be a series of animal faces with the inclusion of one lone portrait of an African face. Which is why I started this post by asking:

"Is it just me or is this art series racist?"


Now let me first start by saying that the outing of this work as racist does not mean I'm calling the artist racist. I was discussing something similar recently with my undergrad class as we were working through the Stuart Hall essay "encoding/decoding" and were considering how the practice of en/decoding images speaks of our conditioning, place in the world, the ideologies we subscribe to and also our ignorance's. Thus we create (encode) images, and series of images, with the knowledge, signs, and symbols that we have learnt to see the world by and assume that others will see (decode) the images we make the same way. And like minded people will usually see all the same things we see in a image. But that doesn't mean that there isn't more to be read from or denoted by the signs and symbols used in the encoded of image(s). 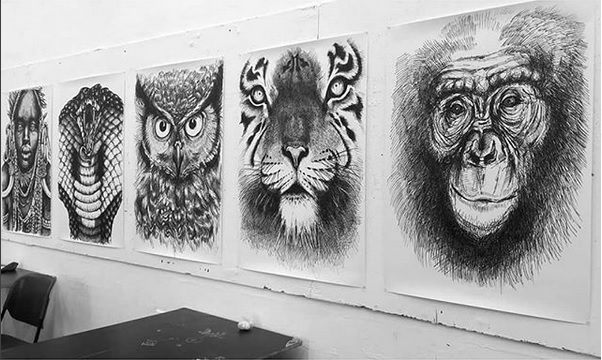 Separately, the portraits that this artist offers are beautiful, rich and do not racially offend. But as a series or in the close proximity that the artworks are captured within, yes, they are racially offending! Together the artworks imply a commonality, relationship or a series theme, something linking them in a succession of thought. So how does one move from drawing animal faces to an African portrait or an African portrait to faces of animals? And its not just an African face is it, its a tribal African face that connotes, by its presents in this series, a sense of feralness, (dear I say) primitivenes or a closeness to a nature that is shared by the animal faces it's hung next too. Yes, humans are animals too. But why is it this type/race of human that was deemed fitting next to animal counterparts?

We can't pretending history hasn't happened, in fact we can't pretend the present isn't happening. Black people everywhere are dehumanised on a regular basis. Shot in the streets "like animals", called the police on for normal acts - like sitting in Starbucks, playing golf, or complaining to a restaurant manger for a cutlery charge - that their blackness seems to invalidate, render them inhuman, unnatural, and suspicious. Racism is not black and white but that middle grey area. One can have black friends/family/children and still be the ones calling the police or drawing these images. Racism is visuality, a way to see the world, the way in which said world is ordered, understood through and enacted in. And individually our experiences and perspectives expose only so much of that reality (and that's only if we are open to seeing/understanding it in the first place). 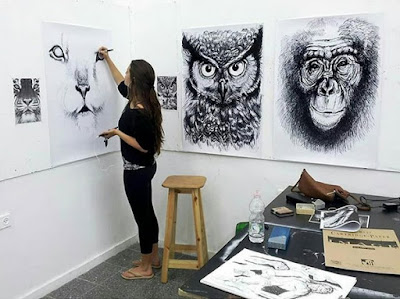 I think this artist does wonderful work and is incredibly talented. But I question what she is not seeing and the racial biases she is reproducing in her artworks. I can only hope that she didn't intentionally choose to make racially insensitive connotations in her work and would recommend that she think through how and why she connects the two types of images together. This is not the political time to be offended by the word "racist" being brought up but a critical time to question how we reproduce it, especially if unintentionally. I see racism as looking out of a window. There is only so much of the world that is made visible through it and even when we venture out into it doesn't mean we see it all. In fact we may never see it all which is why, if we are truly invested in ending racism, we need to instead work together to piece together an idea of the world that is as close or as true as possible. So I'll leave it there but also with the question I started the post with:

"Is it just me or is this art series racist?"
Labels: African Animals Art Artist How to see the World Instagram Media Nature Racism Random Find Television Popular Culture Visuality