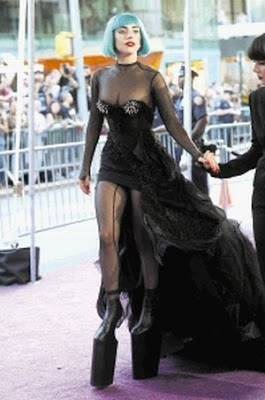 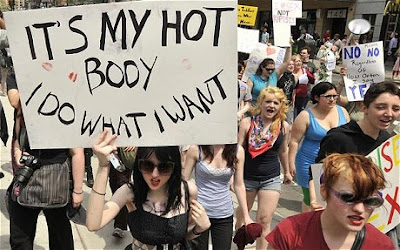 *Lady Gaga at the CFDA Awards 20011; Sluts Walk, London 2011
The weekend gone saw the controversial Sluts Walk reach the capital and with that a whole host of sexism charged articles were written about the walk and its concept.
One of my favorite articles, and by favorite I mean made me most irate, wasn't about the walk but had the same sentiment, discussing Lady Gaga's recent outfit choice to the CFDA awards [see above pictured].
Written by Fred Khumalo, a man, for Times Live he unshamelessly expresses his sexist opinion on women's (little) right to express themselves through their dress.
Now I'm a big Lady Gaga fan, though putting my admiration for the artist aside, my critique of the article was that it was pure sexist garbage! According to Khumalo, Gaga's revealing outfits at the award ceremony didn't leave much to the 'male' imagination, I quote: "I don't think we want to see her completely naked. We want our imaginations to be teased". Why is it that the female body must always be up for scrutiny and objectification? This male belief that all woman are expected to (acceptingly) satisfy the the male gaze by dressing accordingly is very sexist, its basically saying that women are pretty sexual objects and they should dress to reflect this!
This especially is expected to be upheld by women in the media, were 'looks' are considered more important that substance. Women in media are meant to feed the male gaze with titillating and tantalizing imagery, though doing so by wearing provocative outfits are forfeiting their integrity and creditability.  Khumalo confidently states with belief that other males will agree that:
"You see, I have watched her [Lady Gaga] a number of times on TV, but can't remember what her voice sounds like, let alone the lyrics of her songs. Why? Men can't multi-task. All that I am able to do when she appears on TV is to watch her body - an act which shuts out my ability to listen to what she is saying. Talk about a one-track mind. But can you blame me? Come on, guys, let's own up."
This notion of forfeiting our creditability makes up the male argument the Toronto policeman expressed when telling a women's personal safety class that "women should avoid dressing like sluts in order not to be victimised", hence the reason Sluts Walk was created.
As far as the sexist male thought process goes women who dress provocatively are (somehow) forfeiting their right to refuse sex and are subsequently 'asking for it'!
Sadly this trail of thought can be extended to justify domestic abuse towards women, I can't tell you how many times I've heard people say 'Rihanna probably deserved to be beaten up by Chris Brown' because she seems like the person to...[choose a personality trait of your choice].  Attitudes towards violence against women is usually considered at fault of the woman, and whats scary is that some women have adopted the same sexist thoughts.
With this said the real message behind the Sluts Walk should simply be a platform where women can express themselves through dress without forfeiting their integrity and creditability, while at the same time raising awareness of the sexist views that are still hindering women's right to liberation and equality. This is something all women should support, because at the end of the day all women scantily dressed or not are under scrutiny of the male gaze, remember Khumalo's does says "We [men] want our imaginations to be teased."
So women whether your a slut or a slut in disguised be proud of who you are, whatever your style of dress wear it with conviction and courage.
Articles of interest:
Too Much Flesh Can Make You Go Gaga, Times Live
Slutwalk London: 'Yes means ues and no means no', BBC News