The Need to Riot 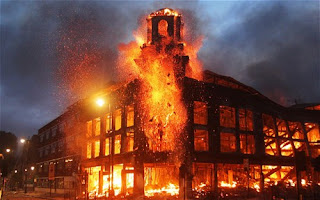 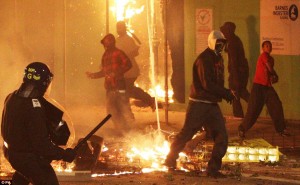 As it stands we have endured four nights of riots with the pressing fear and concern that more are to be expected.  Though from Monday night the dynamic of these riots changed, as we saw something contained to London spread to other large UK cities like Birmingham, Liverpool and Bristol, which are now affected by masses of their own youths causing public damage, setting fires and looting.

Why? Why is this happening? Why are these young people taking to the streets and causing all this dismay? Why has this gone on so long and why aren’t these youngsters’ parents controlling them better?

Firstly, it seems from all the images released by the media that this is an issue of race; as few white youths (or other ethnicity's) seem to have been caught rioting and looting on camera. Even in the predominately white borough of Enfield were the majority of faces captured black.

Personally I don’t think it’s an issue of race but class, specifically the underclass, which black people are twice as likely to fall under compared to their white British counterpart.


In no way do I condone or encourage the behaviour and events that have led to the deprivation and damage to many areas of the country.  Though it is very counter-productive for our politicians, police and many of the general public to spend time condemning and demonising the youths involved. What is needed is as a progressive strategy that is more empathic in its approach, we need sound resolutions to answer basic questions like: What is causing people to want to riot? Why has it appealed to our youth; as well as the pressing questions like: How are we going to deal with the issues which are forcing people to riot? And, what lessons can we learn to ensure this is avoided in future?


We must remember that well adjusted and content people do not need to riot. Aggression and violence are behaviours triggered by negative feelings of emotions, such as feeling of being weak & powerless, isolated & alone or demeaned & disparaged.  But what have the youths of today got to complain about?


For the black youths of modern Britain the conditions are said to be better; the Metropolitan police said on camera after Saturday nights riot in Tottenham that their ‘relationship with the black community had improved significantly over the past 25 years’ when dismissing connections with the Tottenham riots of 1985.
There is very little truth in both of these statements, as for a start 25 years on, large percentage of black people are still living in low-income households and are still battling with unemployment. Black children have for many years been steadily under performing in education. Not to mention the prevalent stereotype of black people being criminals, which has continued to make them more likely to be stopped and searched by the police than any other ethnicity!  Also reports have shown that 4 in 10 black men in the UK will have their DNA on the police database! - So what’s improved?


The atmosphere is different now, yes.  We live in an era of political correctness, where the government chooses to avoid the topic of race and simply throw a little money in the direction of inner cities hoping for a cure. Businesses and the media have adapted to the equal opportunities act, hiring a sprinkle of token blacks to help meet their ethnic quota. And those that were openly racist now know to keep their opinions to themselves.  A patch up job to a problem that needs full restoration work, no foundations have been laid and no efforts made to tackle the real issue needing addressing – peoples racist personal attitude/perception.


This year alone we have seen 3 influential media types [John Galliano, Brian True-May & James Brown], whom are all British, express their racist views. As the media is a very powerful propaganda tool, this is very concerning and can also explain why the representation and amount of black people seen on British TV programming has hardly improved over the last 25 years.

But there are more opportunities available nowadays, or are they? Mr. Cameron and Clegg maybe able to 'weather the storm' of all the cuts they are imposing but it is hitting these youths hardest, as they are losing vital support.  For those that don't have much these cuts strip them of what little dignity they have, with further education funding (EMA) being scraped, youth centres closing down due to lack of government funding, the general cost of living has gotten higher (food/travel/petrol/clothing/utility), further increase in unemployment and benefits being withdraw.


It is becoming clear while the youths of this country riot that the coalition slogan 'we are all in this together' was not aimed at them or to the many of us, it was to the white middle class, whom will comfortably 'weather the storm’ of our current economical climate.
Those out rioting are victims of their circumstance, just like a child is the product of its upbringing.  It is understandable that those directly affected by the damage caused are angry and these feelings must not be disparaged; though when considering punishment we cannot let these feelings of anger corrupt our judgment.

Community service is an adequate punishment since both hurt parties stand to gain something. The offenders would be giving back and help to repair the community, it would also reconnect them to the very community they feel disgruntled and disconnected from, though most importantly making then clean up after themselves will fix in the message that anti social behaviour and violence are not acceptable and will not be tolerated.


For those in favour of ‘locking them up and throwing away the key’, consider that our prison system is already overcrowded, that it will cost the tax payers around £200 a day keep them imprisoned and that this will only alienating them further creating more feelings of resentment.

There are no opportunities of redemption in our judicial system, no preventative measures only punishment.


Cameron, welcome to your big society.