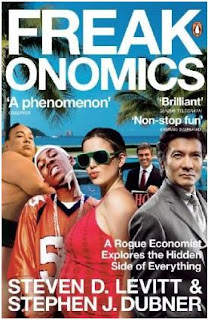 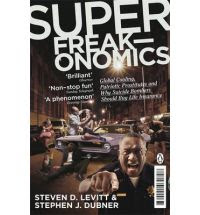 I have fallen in love with the field of Micro-Economics and it is all thanks to the witty, forward thinking & creative genius that is Steven D. Levitt.
Levitt's an American economist and university professor, reels off quirky subject titles such as 'why drug dealers live with their moms' and 'how is a street prostitute similar to a department store Santa?' make very interesting and informative reads.

Showing the importance of statistics and data, Levitt works his magic turning random information and numbers into true accounts of the world we live in.  This is a much needed practise in our current society where we are more then happy to just accept 'conventional wisdom' instead of questioning the things we are told!

My favourite of the 2 books would be the first, Freakonomics, simply because the topics I personally feel most strongly about were covered, such as: female sexual health, parenting, black culture and the black-white divide, thus making it the most provocative of the 2 books.

Talking openly and candidly, Levitt’s discusses subject matters like how parenting styles have little to no affect on your child’s educational prospects where as genetics and social circumstances count for everything! Also explained is how legalised abortion has had a positive affects on American crime, this being the thesis which has caused much controversy in !
In a nutshell Levitt’s explains that due to abortions becoming legal in the

Fascinating stuff, though obviously not for the faint hearted or those easily offended.  Levitt’s does explain that economics & morality does not go hand in hand, and starts the first book saying that:

"Morality, it could be argued, represents the way that people would like the world to work - whereas economics represents how it actually does work."

What I love most about the books is its relaxed tone; it’s very easy to read, funny yet thought provoking and educational. Levitt explains economics terminology and techniques that can be applied in decoding everyday life should the book inspire you to always look a little deeper.
This is why I would consider the books a must read for all men, women and (school) children as critical thinking isn’t something that should be left to the academics!
Labels: Book Review Culture Feminism Parenting Racism