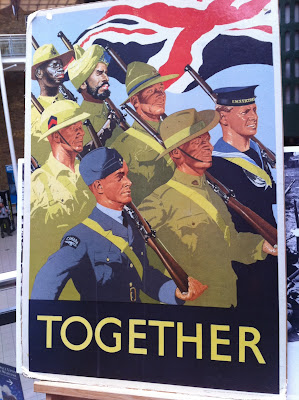 Today I attended the For King and Country event at the Imperial War Museum London for Black History Month this October. The discussion was on the untold story of black soldiers in the British forces.

Very interesting and interactive, the staff were passionate and knowledgeable; they shared facts, showed unseen photographs and played with artefacts.  I really enjoyed and learnt a great deal, for example, WWI wasn't solely fought in the trenches in France! - In fact black soldiers from Africa & the British West Indian Regiment fought the Germans and the Turks in Iraq and Palestine.
As expected the level of racism was high, with accounts exposing facts that captured German prisoners had better living conditions then the black solders at the Battle of the Somme.

History is soo soo interesting and colourful but unfortunately it is also very bias, which is why you really do have to seek out the true accounts for yourself!

Will see V-Day in a very new light!