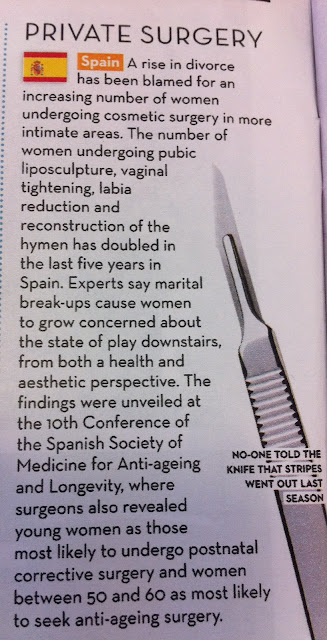 As much as I don't agree with cosmetic surgery for purely superficial reasons, the procedure that burns me the most is the hymen reconstruction. This idea of restoring ones innocence is derogative to women and the fact that this obviously appeals to men makes me feel sick!
This clearly shows that the male chauvinistic attitudes hasn’t changed in the last 100 years of women’s rights & feminist movements, (most) men still have little to no respect for women and continue to perceive them as mere sexual objects.
What has always been my problem with the cultural value placed on virginity is that for men this is seen as something to be rid of as young as possible, where as in women its seen as some kind of coveted attribute.
In the 21st century do men still shop for women like they did cattle?!
It’s easy to blame women for buying into this obsession but the truth is until men fix their attitudes towards women; women will continue to live up to these expectations in hope of gaining a husband! Because if the truth be told, all the female liberation achieved so far, has not helped shake the social belief that marriage and children are synopsis with womanhood!