Skin / When She Was White - A True Story About Colour 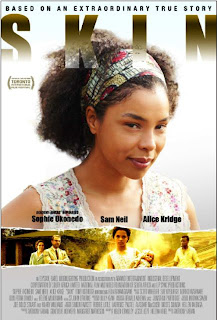 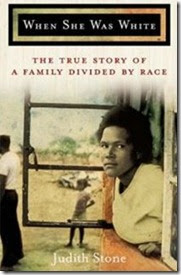 When I first heard about this film and story back into 2008 I promptly bought the book to read first.
A story about the unfortunate luck of a 'coloured' child born to white parents in South Africa during the apartheid. Sandy Laing, who is played by Sophie Okonedo in the film, spends the early part of her childhood battling to be considered white by both the government and her peers, only years later to be disowned by her Africaan family for falling in love and running away with a black man.
After which her life gets more complicated, since legally being white in South African at that time meant she is not allowed to be living with her black partner within the black community nor is it legal for them to have children, which they go on to have 3!

The story is truly fascinating on soo many levels, as it not only gives an insight into the sentiments of South African before and after the apartheid era, it also exposes the laws of apartheid as shallow and empty.
One of my favourite extracts from the book was that at the time of race segregation in South Africa, visiting black Americans where exempt from segregation laws and shown respect by white South Africans!
Another interesting extract is the test to confirm white ethnicity, the most popular being the 'pencil test'.  This is when a pencil is inserted into the hair of the people tested, if it falls out then they are white! - Crazy!

The film, which surprisingly I only manage to watch tonight, was shown on BBC 2, I assume as part of their mixed race season aptly scheduled during Black History Month.  The film was good, though not completely faithful to the book, though the book ending is quite sad and unlike the film which ends a little happier.
In the book, Sandy doesn't manage to contact her mother as often as in the film; also she continues to live in poverty struggling to raise her children (which I’m sure she has more than 3).

I would recommend both the book and the film, since it questions the very foundation of racism.
Labels: Book Review Film History Politics Racism World Affairs