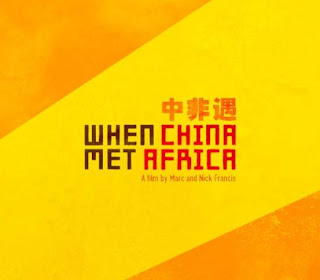 Over the weekend I attended the premiere of the docufilm (documentary film- me being smart!) 'When China Met Africa'. The film shows the workings of the strategic partnership made by the two nations back in 2006.
Directed by British film makers Marc and Nick Francis, I found it hard to understand the direction the film was taking, was I meant to be feeling sympathetic for the Africans who again were being exploited or impressed by the work ethics displayed by the Chinese or was I meant to take on the role as a voyeuristic Westerner?

The film focused solely on Zambia's relationship with China, and the story swapped frequently between the political aspects of the relationship to the business side.
The storyline follows the lives of 3 main characters, Zambia's Minster of Commerce, a Chinese farmer and a Chinese project manager, both of whom were living and working in Zambia.

I am not sure whether it was the films intention, but I found Zambia's Minster of Commerce to be a little childish, much the same way a 'little boy' imitates his elders.  The film showed scenes of the minster sitting in his fancy office, talking to the press and on a visit to China receiving gifts, all of which he seemed to really enjoy. Not that one shouldn't enjoy their job but considering that his job is to improve the lives of 13 million Zambian's, in which over 60% live below the poverty line; you'd think he'd take his job a little more seriously!
There was one scene with the minster when he visits a church and thanks the local people for working hard to support the country. I can't say I was convinced as the scene seemed very insincere, just another politician doing the rounds.

The story of the lives of the two Chinese nationals living and working in Zambia were very insightful and showed the somewhat honourable mind set of the Chinese.
Both men had made personal sacrifices with their decision to move to Zambia. In the case of the project manager he had left his wife and children back in China to 'successfully' complete the project building Zambia’s roads.  For the farmer he had move his family to Zambia, as he was sick and tired of not making enough money to support his family in his native country so he bought a piece of unkempt land in Zambia and made it fruitful.  Early on in the film, he explains that he had to work extremely hard to make something of his farm for his children’s sakes; he goes on to explain that when many of the locals would be out socialising or worshipping he would be working in the fields.

What I found most interesting about the farmer was his living conditions, which was not much better standard to I’m sure many of his workers. This caused tension within the family and in one scene the farmer’s daughter expressed her desire to make something of herself and escape her current situation.
It mustn't have been all bad for the farmer since he was able to acquire 2 more farms, though at one stage we do see him cheat half of his black work force out of their wages as he didn't bring enough money, though he promised to return on Friday with the rest of the money its assumed by the men reactions that Friday wasn't soon enough.

I found the project manager uninteresting, his most endearing scene is when he is talking to a Zambian government official asking for the project budget to be increased, though it is very clear the Zambian government doesn't have much money since the project manager received earlier a letter asking that instead of improving the roads he just fill the potholes! To this he explains the longevity of improving the roads as opposed to the short term solution of just filling the potholes. This project soon gets scrapped due to lack of government funding!
I found that he didn’t interact much with the Zambian people, instead he was always seen with Chinese people/colleagues and speaking Chinese.
Though it was apparent in the film that there were language & cultural barriers faced; with English being the common language used between the 2 sides. Also it was clear that the Chinese viewed the Africans as lazy, I found this to be very interesting!

After the film there were questions & answers with the directors hosted by John Snow (Channel 4's news reader), which raised some interesting points, though since the audience was predominately white I do thing the perspectives where a little stilled.
My concluding thoughts when leaving the screening were whether this relationship between China and Africa really was as ‘win-win’ as they describe it to be?
Africa is showed in the film as not being ready to play ball with big fish like China.  Since the contracts given to China only encourage dependency as Chinese operations in Zambia predominately use Chinese people, therefore using African people for unskilled tasks, this halts progression.
Though China’s work ethnic maybe more honourable than the West, they are essentially talking the little money African countries have. Providing them with roads is all good but in a couple of years when new roads need building or maintenance work is needed Africa will again need to call to China.