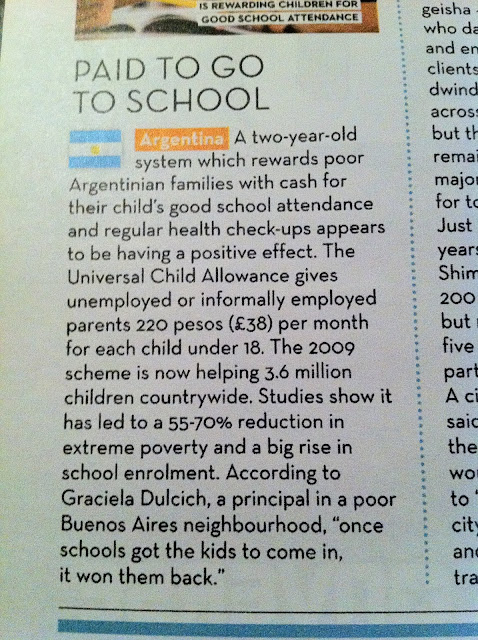 I actually think Argentina could be onto something, this could really be a very good idea as it would provide a positive incentive on a sensitive subject.
Our government may favour the practise of penalising parents with fines and loss of benefits but this hasn't seemed to help, instead it has only managed to stigmatises parents on a lower income as being bad parents!
I may not have children (does a god daughter count!?) but from observations being a parent isn’t easy, especially with present day factors at play.
Parenting is a huge responsibility and I can’t imagine many new parents’ hopes and intentions aren’t to raise a well adjusted son or daughter!
So consider if in this country (despite the government cuts) child tax credits were performance related? The aim would be to reward parents whose children had good attendance rate, behave in school and had no criminal records or ASBO’s. Obviously the amount of money would need to be class related like the scraped child tax credits, paying out more to those with lower incomes.  This combined with the offering of free parenting advise and services across the class divide would encourage a concept based on rewarding over punishing thus positivity enforcing good parenting skills, it would also help shake off the shame parents often feel asking or needing help & support.
For the rich this incentive will spark little interest since they are already financially capable to provide for their children and not just in the obvious ways i.e.: living in better areas, paying for private schools or ability to buy the latest technologies.  Even before their offspring’s are born they will have access to post & pre-natal care and advice, something the NHS struggles to provide the rest of the classes.
And for those who make up the lower income households, they would stand to benefit the most if their child shows good progress, since more money will be coming into the household as opposed to losing money in cases of neglect of poor parenting. Since support is also being offered this idea could potentially make it easier to spot children genuinely being neglected and/or abused.
Considering the reactions after the UK riots about broken Britain, parenting and morals, I don’t think it would hurt to do a pilot scheme!