Was The Nivea Ad Racist Or Are We Just Too Sensitive? 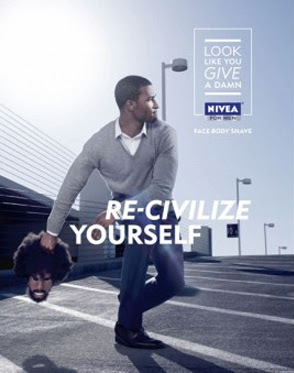 I know I'm late on discussing this but 'better late than never'!

The recently Nivea for men advert with the caption "re-civilize yourself" which featured a clean shaven, well dress black man holding his 'former' uncivilised head (see photo above) has caused much outrage.
On twitters many voiced their anger about the adverts racist connotations and it’s not hard to understand why.  Of course an image of a black man and the caption “re-civilize yourself” was going to cause controversy, apart from the fact that it implies black men are not civilised it also implies that they once were but have now regressed.  Meaning some time after the abolishment of slavery where they were first made 'civilized' we went back to our ‘primitive’ ways!
Maybe the cause of this was the end of the Jim Crow law or maybe it’s all the civil rights movement’s fault, what about Hip-Hop? Or maybe we (black people) are simply over sensitive! Not that black people don’t have good reasons to be sensitive but if you were to apply a little perspective when scrutinising the advert it does become a little less offensive! Consider the following points:

What if Nivea used a white model instead?
The Nivea campaign for which this advent belongs to is comprised of more than one advert with the same concept. In fact another Nivea advert from the campaign was similar in image but instead the model was white.  In a similar pose, dressed smart and again holding the head of his ‘uncivilised’ self, this time the caption read “Sin City isn’t an excuse to look like hell”.
So what if the captions where switched so that the advert with the white model read "re-civilize yourself", would this still be offensive?
The ad’s message would still be the same, it would still be saying that men are uncivilised (and well unattractive) till they use Nivea, though would this now only apply to white men since the model was white? And if so wouldn't the white audience be just as offended? – I very much doubt it, why? Well consider this...
Would the caption "re-civilize yourself" still be offensive if it was on a Sean John or Rocawear ad?
This raises the question whether the brand identity and models used specifies the intended audience, i.e.: black models/brand = black audience, white model/brand = white audience, Chinese model/brand = Chinese audience?
We should also consider how people are more comfortable with racially provocative behaviour and language if it comes from within their own community/race, i.e. The word ‘nigga’ used by black Hip-Hop artist or Little Britain sketches performed by white British actors, had any of the 2 examples been done by someone outside if the ethnicities it would be considered offensive.
When the 2 above points are considered it’s obvious that the caption "re-civilize yourself" would not be offensive if it was on a Sean John or Rocawear advert, since the product is for black people by black people so the caption would be taken as a inside joke!
But then Sean John or Rocawear clothes are not just worn by black people, both brands are sold internationally to people all over the world. They too will use models of other ethnicities so what if a white or Chinese model wearing Sean John clothes had the caption "re-civilize yourself" would the white/Chinese audience not be offended?  -  Again I doubt it, as I imagine it would be passed off as a quirky marketing strategy.  I mean just picture a white guy in Sean John’s urban clothing collection with the caption "re-civilize yourself", who would that offend?

What if instead of the word ‘re-civilised’ Nivea used ‘improve’?
‘Improve yourself’ would I’m very sure still cause outrage if it was still captioned on the black model’s ad.  Also the caption wouldn’t have as much zeal to carry off the adverts concept. -  I mean how many of you would buy into a product that will improve you over a product that offers social advantage!? – So you can see why Nivea chose the caption they did, they are only trying to beat their competition and make a sale!
So it would be fine for Sean John to use the caption but not for Nivea? What’s the problem? Brand Identity or more the case ethnicity.  Nivea being a German company belongs to the European/white ethnicity whereas Sean John and Rocawear are known to be black, which is why in the case that the white model in the Nivea advert had the caption "re-civilize yourself" the white audience wouldn’t have been offended since the jib was coming from within their own race.

Regardless whether black man are civilised or not, will Nivea products be able to civilise anyone?
Obviously the answer to this is no but it does remind you that it is after all only an advert for male beauty products.  A market which has been on the steady rise the past decade, with  celebrity males like P. Diddy, Ryan Gosling and Trey Songs perpetuating the notion of the ‘metrosexual man’. - Men who invest a lot of time and money buffing, waxing and preening themselves.
Nivea’s current marketing campaign aims to appeal to the Metrosexual men and like many of their peers uses psychological/emotional trickery to distinguish their products potential over the sea of competitor products & brands.


Though it is fair to say that considering racial tensions, it was silly of them to have used the caption with a black model, it could have genuinely more offensive had the ad instead been run by the adult learning centre, a religious sect/church or the job centre!?
Labels: Adverts Race and Identity Racism