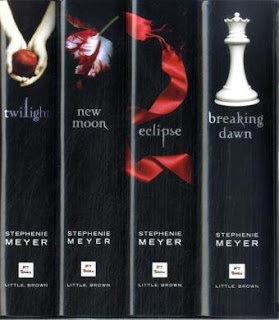 Admitting to having read the four Twilight books isn’t an easy task for me, since most people will usually expect that I enjoyed them. - Which I didn’t! - In fact I thought the story was awful, a poorly formed storyline and a terrible example of young womanhood that goes against the very principles of modern day feminism.
The books serves only to enforce patriarchal indoctrinations, which is why I can't understand how a fellow female could aim such books at an impressionable teenage market.  I also do not understand why in the 21st century this story is being lapped up by women worldwide!?
The only way I can justify having read the books is summed up by the quote from Sun Tzu “Know your enemy.”

I have seen very few reviews which critically analyse the story and its damaging impact, which is something that deeply concerns me considering how widespread the books and films have become.
With the worldwide release of the film Breaking Dawn, the first part of the final book split onto 2 parts, I offer my critique on the Twilight Saga in hope to insight more thought provoking debates on a literature and film franchise with a heavy anti-feminist message.

If fortunately for you, you’ve managed to escape the book and film craze, let me briefly explain the storyline. The story follows female character Bella, a 17 year old American girl who feels forced to move in with her father when her mother remarries.  Starting a new school, Bella falls for a mysterious boy who she finds out is a vampire.  The 4 books explore not just the complexities of their relationship but also of their two worlds colliding.

The character Bella suffers from low self esteem and lacks confidences on a far extreme scale then the average teenage girl.  Despite her inability to see herself as the slightest bit pretty, Bella is able to attract the ‘best looking’ boy in her new school (the vampire) as well as two other love interests; though sadly it is not until she's made into a vampire does Bella ever consider herself pretty.
Bella embarks on an extremely unhealthy relationship with Edward her vampire love interest, were we see her develop in addition to her many neurosis a fear of ageing (at only 17 years old) since Edward has not aged past 18 years old. Bella also gives up the normal life and friends she managed to created for herself in a new town for her relationship with Edward, and will continually feel inadequate and blames herself for any pitfalls displayed in their unconventional relationship.

Edward is a hopeless romantic vampire, born (and stuck) in the 19th Century.  He doesn’t follow the conventional vampires in classic literature or films, instead of sunlight burning Twilight vampires they sparkle like a diamond, they also can’t be killed with a stake to the chest nor can they be killed by a mere mortal, also they are capable of sustaining good health on a diet of animal blood instead of from humans.  These all seem intended to distinguish Edward as a ‘good’ vampire in comparison to the evil nature displayed by most vampires in the genre.

What I found most convenient about Edward was that addition to his good looks, amazing body and romantic nature he and his vampire family were also filthy rich and well connected. – Obviously these are very important mating attributes all teenage girls should be looking out for in a perfect mate!!

Edward’s character is too cliché for my liking and comes off hypocritical.  A vampire with high morals Edward is said to be struggling with an internal battle with his religious beliefs and his reality of being a creature against god. Yet he has no problem depriving Bella of normality, turning her into a vampire and fathering a vampire baby with her!?  - Just makes no sense to me!
It also makes no sense that during the course of the first 3 books, Edward battles with being in the same room as Bella, since her bodily scent is irresistible to all vampires (what are the odds). Edwards has to use all his self control not to kill her, yet by the forth book, he has no trouble having amazingly wild vampire sex with Bella without causing so much of a scratch on her body (unfortunately the bed wasn’t so lucky).

This brings me to another issue I have with the books.  Publicised as discussing teenage desire and encouraging sex after marriage, all the so called pent up sexual desire boils down to the fact that Edward being a super strong blood lusting vampire could potentiality loose self control during sexual arousal and harm  Bella. Not quite sure how that one translates into a real teenage scenarios, nor did I see how the many references to wild incessant vampire sex in the fourth book was handling the subject tactfully!

The best character in the book aside from Bella’s sensible yet un-influencing father was Jacob.
Jacob is a Native American Indian who is a close family friend to Bella’s dad.  As much as I found Jacob a much needed antidote to a unhealthy love story he too came with some pitfalls!
Jacob and Bella become very close in book 2 when Edward leaves Bella for 'her own good', pathetically Bella is unable to cope without Edward and becomes both zombie like and suicidal. Jacob helps restore Bella to a semi normal state by introducing her to extreme sports.  He falls in love with Bella and fights for her heart (unsuccessfully) in the third book as Edward obviously returns.

I was disappointed to find out in book 3 that Jacob was a shape shifter, it served only to add insult to an already injured story!
Jacob’s Native Indian heritage enforces that he and his tribe turn into wolves to protect the area from vampires, though conveniently Jacob’s love for Bella allows him and his tribe to go against their tradition and work in partnership with the ‘good’ vampires (Edward and his family) as well as allow and support Bella’s decision to become a vampire and give birth to a vampire baby.
Oh it gets worse; Jacob becomes betroved to Edward and Bella’s hybrid baby soon after Bella give birth!

The final book was in my opinion the worse part of the atrocious Twilight installment, very anti-climatic, much of what the story attempted to build up was futilely tossed away.
For example in Bella’s journey to become a vampire it is expected that she will have to give up contact with her family since she’ll be legally dead, though somewhere between having a baby she never wanted and obtaining a super doper magical vampire power that conveniently protects everyone in the books final battle, Bella gets to have her cake and eat it!

At 18 years old, I never saw the need for Bella and Edward to have a child, though it came as no surprise since the book raised the topic of womanhood being tired with motherhood on a number of occasions such as with Edwards vampire sister Rosaline admitting to yearning having children and Edwards Fathers sole reason for creating the family being to for fill his wife’s need to be a mother.

The reasoning behind Bella's ability to conceive Edward’s child was absolute rubbish and showed how little the author knows about the male sex organ. According to the book, vampires can't reproduce since their bodies are frozen at time of death, therefore as a female vampire your eggs can't be released, so in the case for Edward and Bella, his sperm could fertilise her egg while she was still human!
Because sperm doesn’t need time to mature, right, men just produce a lifetime of sperm during puberty! For that story to be plausible Edward would have been holding onto the last matured sperm since he died, meaning (crudely) that since dying Edward hasn't had sex or masturbated, so he has been holding onto his last batch of matured sperm for 100yrs just to (unknowingly) impregnate Bella!!

I also felt it was a cop out that Edward was able to guilt free turn Bella into a vampire, despite him being deeply against condemning the girl he loves to a soulless existence. Clearly any existence is better than death, as during child birth Edward clinically administers his venom (because these vampires release venom) to a dying Bella by syringe. – Because the savage romance of skin to skin contact by biting to save the girl he loves is passé!

I fail to see the Twilight saga as quality literature nor would I recommend that impressionable young girls read into the story since it offers no real moral other then endorsing low self-esteem in girls as a patriarchal tactic to keep women sub-servant to men.
We need to be inspiring our future female generation to be confident in themselves and not to go after any good looking rich guy, that can acceptably alienate them their friends and will ‘fix’ all their flaws!

It surprises me that such a story could get published, and that female readers are buying into the false sense of romance the story offers.

If you read Twilight and enjoyed it I recommend the below books!:
- (Anything by) Germain Greer
- The Beauty Myth by Naomi Wolf
- Gender Trouble by Judith Butler
- (Anything by) Bell Hooks
-The New Feminism by Natasha Walter
Labels: Book Review Culture Feminism Film Sexism