A Visit To The Smiling Coast 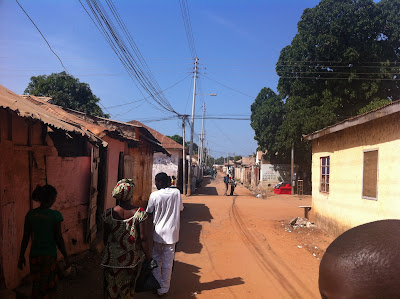 This month I took my first trip to the motherland, opting to holiday in the West African country of The Gambia; also known as the smiling coast, The Gambia is the smallest country in the African continent, though it surely does not lack any slender or rich history.

A former British colony, Gambia played an important role in the slave trade; the River Gambia was used as a hub for the exportation of African slaves, first controlled by the Portuguese from 1456 then by the British in 1661.
Gambia won its independence from the British in 1965 and has since been relatively political stable.

The country is filled with happy and friendly locals, with my coach transfer to and from the airport greeted with kind waves from the local people.
Tourism is said to be Gambia's biggest industry, though I don't think this alone is the reason for their friendliness, I found the Gambia people to exhibit much pride in their country, culture and a contentment for their lifestyle.

Surprisingly to me, Gambia is a Muslim country with the percentage said to be 70% Muslim 30% Christian.
Though unlike stories I've hear of Arab countries such as Dubai, said to be somewhat intolerant to the behaviours of western tourists, Gambia is welcoming and very accommodating.
Staying in the Senegambia area, a popular tourist destination due to its nightlife, bars and restaurants, I was impressed to find out that these facilities were also used by the locals, particular the clubs. Though interestingly, since much of the youngesters are muslim not drinking and smoking doesn't affect their ablity to have fun (someone tell us Brits)!!!

Music is very important to Gambian youths, though they appreciate their traditional music; they also have an interest in international offerings.  Though again to my surprise, it’s not pop or hip-hop that they are crazy for but the conscious sounds of old school Jamaican reggae and I mean 'old skool', the type of records I remember my parents playing in my childhood.
It was amazing to see music make such a positive impact, to know that the message laden music of reggae can transgress culture, language and religion.

I found out the hard way that one week wasn't enough time to visit the country, though I managed to cram a lot into my short stay.  I visited the capital Banjul, Serekunda Gambia's largest city, Bakau and its crocodile park, Dippa Kunda the batiking district, Tanje a fishing district and home of one of the many museums I visited and of course Jaffureh, a small town who's history is tied with the slave trade. 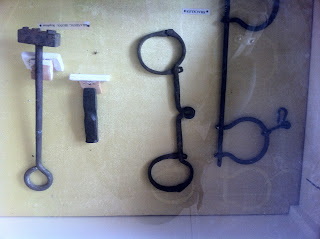 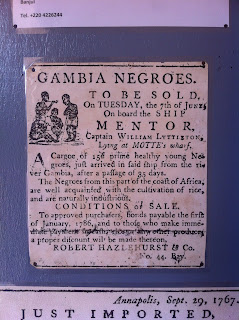 The museums sadly were not well funded yet they contained some of the most interesting and amazing artefacts I have ever seen (see photos above), in all my years of researching into slavery I was presented face to face with whips, branding irons, shackles and neck chains that were used during the slave trade. I was told facts about slavery that books would never share (such as local Africans resistance to the taking of its people, so the black man didn't happy sell off their own people, a historical inaccuracy!) and visited James Island, a small island situated in the Gambia River where the British had a holding fort to house slaves awaiting the journey on the middle passage.

An extremely emotional experience since I am of Caribbean desent therefore my linage is inevitability tired to this destructive historical event.

In all its beauty, culture and history, the one thing that disappointed me on my visit to Gambia was asides from the roots trail (slave trade history), not much of the real history of the country is told that doesn't conform to western stereotypes of an uncivilised superstitious Africa.

I learnt of the local traditions such as female circumcision and gum tattooing, how traditionally men take on second wives, I visited a (not so) typical African hut house, etc, all those things that as a western tourist I'll gasp at in a condescending amazement. Yet nothing was said of the Arab settlement in Gambia in the 10th century, or of the country's role in the trans-Saharan trade in slaves, gold, and other precious goods. This would explain how the country obtained the teachings of Islam!
Again nothing was said of Gambia's history as part of the Mali Empire, one of the most technologically advanced and successful African empires.
The one positive fact I found fact about the continents history, that the iron age originated in Africa before the Arabs and Europeans became familiar, was ridiculed with the said belief that the prophet Sulayman the first to use this craft was given the instrument forceps by god to protect his burnt hands.

It’s sad to see European ignorance’s inflicted on modern day Africa, though despite Gambia's 'economical inferiority', the country is home to some of the most beautiful spirited and tolerant people I've ever met.  Their contentment and appreciation for the simplistic lives they lead make them much richer then those in the West who are enchained in an ever vicious circle of empty needs and materialism.

I thoroughly enjoyed my time in The Gambia, not only did I learn, make friends and just have fun, it also provided me with a refreshing perspective and reminded me why I don't 'need' much and what I do need such as friends and family are the ones I spend little time with!
I will definitely be returning to The Gambia and would without a doubt recommend others to visit and bask in the history and beauty the country has to offer.

With anything really it’s important to remember to dig a little deeper and not just scratch the surface, nothing should ever be taken for face value.

"Until Lions write their own history, the tale of the hunt will always glorify the hunter" an Ewe-Mina African proverb