Book Review: Chavs The Demonization Of The Working Class 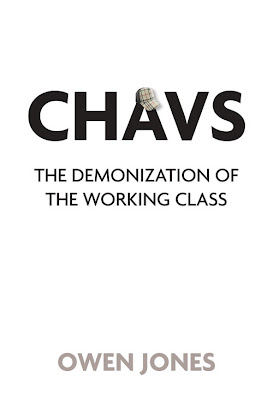 My first introduction to Owen Jones was with his appearances on the infamous BBC2's Newsnight were David Starkey declared "whites have become black". I had naive expectations the book would discuss Chav culture and its symbolism of multicultural Britain and the conditions of classism, though to my surprise the focus of the book was 'exactly what it says on the tin' a political (not anthropological) discussion of the demonisation of the white working class, whom are being caricatured as Chavs.

Jones begins by identifying the origins of the phrase 'Chav' and the social hatred directed at them, he also points out that these hostile opinions are dreamt up in the white middle class psyche and dissipated through white middle class media and politics with damaging effect. Such as the belief that benifit fraud is pandemic in working class communities where as the reality Britain only looses £1billion a year to benifit fraud where as £7billion a year is lost through tax invasion from the rich!

A Labour supporter, Jones makes his agenda clear from the start that this demonisation of the white working class is rooted in an age old class war waged by the Conservative party from as far back as WWII.
Jones explains how much the current state of our society stems from the Thatcher's tyrant rule between 1979-1990; from our dependency on the financial sector due to Thatcher deregulating the stock exchange which forced Britain's manufacturing industries to flee, to the understanding of how unemplyment and the lack of respectable jobs has affected the identity and culture of the white working class. I must say I found the critique of the Thatcher era and her policies very interesting and by far the highlight of the book.
Much of the book reads like a critique of modern political party politics and their relevance as progressive political strategies, which gets a little repetitive since much of Jones arguments were made early on in the book.

There are so many directions the book could have gone in, so many points and discussions that were not included, for example little was discussed about race within the working class nor that of gender, though maybe these are subjects best tackled by someone else from an anthropology or sociological background since Jones standpoint is best when focused on the political issue.
While Jones stated from the start that the focus of the book was that of the white working class the book actually needn't be race specific with much of Jones' conclusion and many of the facts and figures included in the book transferable in explaining the cause and conditions of the British working class experience ethnicity being irrelevant.

Coincidently in raising the class debate the book also exemplified how the divide and rule strategy Diane Abbott recently sparked controversy talking about, are used within class as well as race.  The 'we are all middle class now' denial has created class sub categories, with many working class people whom do not associate themselves with the mythical chav preferring to idenify themselves as 'higher working class' or 'lower middle class'.
Complex stuff class is, which is why I respect Jones' attempt at isolating an identifiable class group to focus his agreements on, though at the same time it is important that the discussion of race and gender isn't devoid from the discussion of class since women and those of an ethnic minority are more often the ones disenfranchised by the class system.

Generally I found the book very insightful and enjoyed most the political critique; I also appreciated Jones concluding sentiment that a change in the selfish mind sets of the rich and ruling elite are needed and that sooner or later those that do not have the power will find power in their numbers. Something to think about!