BBC Faces Of The Year 2011: The Degradation Of Female Achivements ByThe Media 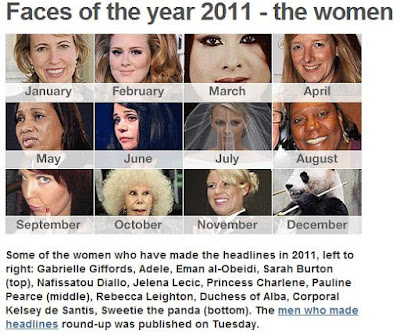 Happy 2012 - We may have rung in a new year though as the saying goes 'old habits die hard'!

While the media churns out reviews on the year past, one review by the BBC is causing international controversy, 'Faces of the year 2011'. People have taken to twitter to vent their disapproval of the list and an online complaint campaign is under way.

The list is separated by gender, with the BBC recognising the men and women who made the news headline each month of the last year.
Where the men's list acknowledges saddened events, deaths, scandal and acting, army and sports achievements the women's list is not so dignified. Instead the BBC opted to acknowledge high profile rape victims, a murder, a gunned down politician and a female panda! - Was this seriously the best they could do?!
Only two female achievements were recognised and that was for music and fashion; that is if you don't count the two marriages on the list (sarcasm!).

The list exemplifies the devaluement of womanhood and our achievements by the media, while young boys get to grow up seeing a variety of successful men in a variety of professions, young girls unfortunately are not so lucky!
Instead the media chooses to highlight the negative qualities of womanhood, such as our inherent ability being victims. Even our acknowledged achievements are somewhat frivolous - marriage, music and fashion. Not that I am in any way saying that these achievements do not deserve recognition (well marriages don't), but 2011 also saw Jessica Ennis achieve sporting success and appointed MBE, we had 3 women of colour win the Noble Peace Prize not to mention the shrewd political leadership seen by German Chancellor Angela Merkel.
Another notable event of 2011 was the death of jazz singer Amy Winehouse, an amazing female personality who's music contained a strong female message.

I like many others found the list offensive, especially since the list is one woman short! How they thought putting an animal on the list was appropriate I don't know but I did express my feelings by making a complaint, and I would recommend others who were also offended do the same with the link below.

It seems we may have turned a year older but wiser I think not, gender equality is one issue we certainly still need to improve on in 2012!