Event: Gender and Men's Studies: Peril or Promise? at London's School of Economics 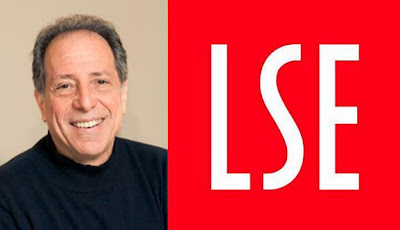 This week I attended a witty, intelligent and captivating public lecture at the LSE (London School of Economics) taken by guest lecturer Michael Kimmel, Sociology Professor at State University of New York and author of the books Guyland: The perilous World Where Boys Become Men, The Gendered Society and few other titles.
The lecture entitled 'Gender and Men's Studies: Peril or Promise?' discussed the importance of feminism in the campaign of a gender equal society and highlighted the importance of men's or masculinity studies as the brother subject to women's studies.

At the very beginning of the lecture Kimmel explained that feminism made gender visible and that 50-60 years ago there were sociology papers written or university courses dedicated to identifiy the conditions of gender in our society.
Kimmel very animated and at times a comedic speaker explained how the issue of gender inequality has a damaging affect on the lives of both men and women, and that addressing this issue is at the interests of both sexes.
One of the studies Kimmel mentioned, was that married households that share the domestic chores are not just happier but that both the husband and wife are physically healthier, less likely to abuse alcohol, less stressed and have very active sex lives. So it comes to no surprise that the most egalitarian marriages are said to be the ones that thrive!

Masculinity studies is said to be important in engaging men in feminist thinking and for their understanding of how our patriarchy society negatively impacts them. Kimmel raised the point that men too are dominated by the men in power and used the example of paternity leave not being offered to new father in America, the idea of taking paternity leaving is considered unmanly and career suicide, with the pressure coming from not just ones peers but also management.
Kimmel points out that there is a gap between the ideology of masculinity and the practicality of men's lives, such as being an involved father and husband and being the bread winner, its not easy being both!

Many more insightful admissions where made by Kimmel in the lecture, many of which I felt could easily be used in the discussion of race, such as "Privilege is invisible to those that have it" and feminism (like racism) is institutional therefore an oppressed group of people do not have the institutional apparatus to enforce their anger. - This offers great perspective regarding the recent Diane Abbott media drama.

A brilliant and thought provoking lecture, Kimmel offered up a fantastic intellectual perspective on a subject that quite rightly needs to be objectively discussed by both genders.
Will definitely be adding his books to my reading list!


Luckily for those interested in the lecture it was recorded by LSE for theirpodcast, see below link to listen and for further details.  I would strongly recommend a listen and would love to know your thought on thelecture, do leave a comment.