In Remembrance of the 1981 New Cross Fire victims 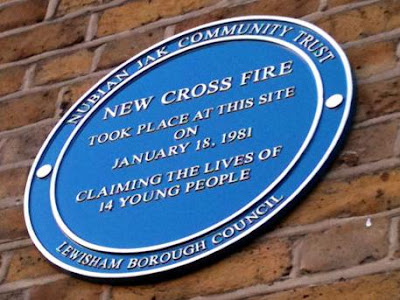 30 years ago on this day, lies an important historical event in black British history the New Cross Fire also know as the New Cross Massacre, for the senseless mass murders of 13 all black victims.

On  Sunday 18th January 1981, 2 young black teens celebrated their 16th birthday in a house on New Cross Road in Deptford when a fire was started on the ground floor which quickly spread trapping many of the guests upstairs. Thirteen of the guests (all black) were killed in the fire and those that survived where forced to jump out of the windows.

To the local black community it was strongly believed that the incident was racially motivated, considering that the area was hot spot for racial tensions. Though unsurprisingly the Met Police ruled out a racial motive, to much criticism.  No one has ever been prosecuted for the murders, due to said lack of sufficient evidence and witnesses.
On the 2nd March to same year 20,000 people marched the streets of London in protest of the mishandling of the case.  There have been 2 inquests into the events, one soon after the fire and another in 2004 though both returned open verdicts.

No condolences were ever made to the families of the victims of the New Cross fire,  yet soon after this London event there was a fire in Ireland, of which the British public and the Queen expressed messages of condolences to the families experiencing loses.

This sad event is just another example of Britain's history of racial hostilities and of course institutional racism.