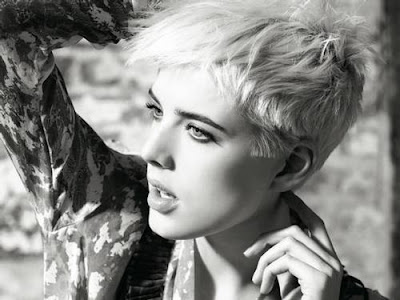 Recent reports has confirmed that British model Agynes Deyn has finally admitted to lying about her age. Deyn whom appeared on the modelling scene in 2007 was said to be an 18 year old uni student hanging with the likes of (at the time) upcoming fashion designer Henry Holland but now we know she was actually 24, making her now 29!

Its said that the reason for Deyn lying about her age was that she was quite old  to only just be getting into modelling so "we knocked off a few years.”, she said speaking to the Daily Mail.
I assume "we" is her and the modelling agency she works with, which highlights the issue of ageism in fashion. I mean considering that Deyn can happily past for a few years younger does it really matter to designers that her age doesn't match? (Obviously it must otherwise Deyn and her modelling agency wouldn't have felt the need to lie).

As a once fashion student I always find the ageism argument quite interesting since the campaign and runway models are not the ones buying into designer brands to keep them afloat, instead many designs are very conscious to the fact that their customer is well past their teens and considers this in their designs.  Its in the world of marketing where this argument arises, as they opt to selling fashion as a concept of youth which win win since it appeals to the aspiring younger generation as well as the older women who is actually buying designer clothes.

Either way its interesting that Deyn felt the need to lie about her age to succeed in her career, which is why its great to see top model Naomi Campbell still gracing international catwalks at the age of 41, shows that their is some hope!