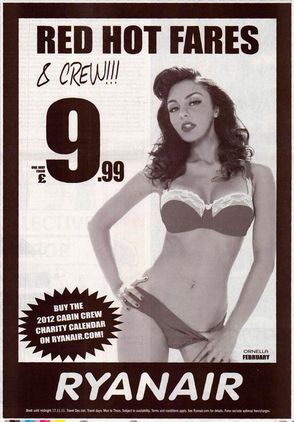 There has been lots of talk last week about the banned Ryan Air advert and whether it was appropriately banned, though while the general consensus seems to be in agreement for banning the advert, alarmingly it would seem much of the British public doesn't see the offencive nature of the ad.
LBC radio held a debate on the advert, going as far as comparing the legitimacy of the Ryan Air advert with that of a Marks & Spencer's underwear advert! How they the could honestly pin these two company adverts against each other is besides me, though more concerning is what is says about our tolerance to female nudity.

Rightfully so the Ryan Air advert should have been banned since it doesn't actually advertise a service Ryan Air is in the business of, the advert offers a deal of £9.99 one way (which we assume is for a flight) but to which destination is unknown.
The sole nature of this advert is selling sex and vamping up the Ryan Air image consider the wording "Red hot fares & crew" which implies that their female cabin crew have been employed on their looks offering their male customers some eye candy on their flight, this can't be far off the mark since the female model in the advert actually is a Ryan Air cabin crew employee.  The picture was taken from the companies charity calender which show include 12 female ONLY cabin crew in their underwear and in sexually suggestively poses on of which would look out of place in a lads magazine (see below pic). 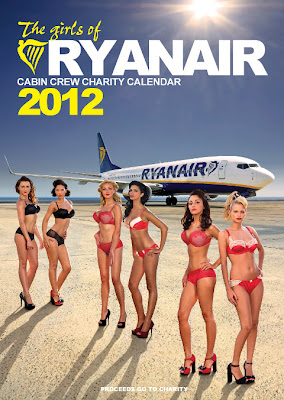 Its terrible that Ryan Air are able to exploit their female staff in such a way, in any of their past and current current calendars the company have yet to included any of their 'red hot' male cabin crew members, or at least offer a separate male calender to even out the exploitation of their staff!

What do you think?