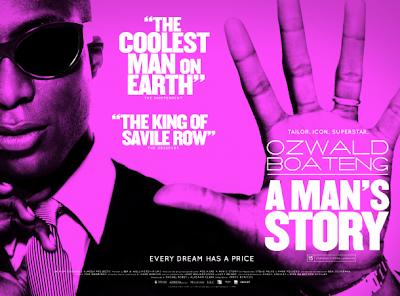 Last week the Hackney Picture House held a special screening of the Ozwald Boateng documentary A Man's Story which concluded with a Q&A session with the man himself Ozward Boateng and the director Varon Bonicos, hosted needlessly by London MP's Diane Abbort and David Lammy.

Ghanian born, Boateng is one of Britain's most affluent tailors and is credited for reviving the British tailoring trade back in the early nineties with his quintessential British tailoring and unique use of colour inspired by his African heritage. Boateng's emergence on Savile Row in 1995 made him both the youngest and first black tailor to open a store on the street. Now with over 25 years in the business and a long list of celebrity clientele which includes everyone from Will Smith, Keanu Reeves, Mick Jagger to David Miliband (not that you can exactly count his as a celebrity!), the documentary which was recorded over a period of 12 years is said to emblematize the life and career of Ozwald Boateng.
The documentary begins in 1998 after a brief introduction of Boateng's life and achievements up to this point, Boateng who commentates in retrospect throughout the documentary shows his arrogant personality from the start, with one of the most pungent early scenes being him verbally abuse his female French events planner on the day of his Paris show (note, he does this to various people through out the documentary). While I recognise how high pressured it must be for him during the build up to his shows I found the scene uncomfortable and hard to watch.
Also discussed early into the documentary was that of the financial difficultly Boateng faced leaving his first wife and we were introduced to his second wife Pascale and their romance both on and off the catwalk.

Through out the documentary we got to experience the highs and lows of Boateng's career from the incident in 1999 when his entire collection was stolen from a central London address, to his first day at Givenchy as creative director of their menswear. Though as we see Boateng unharness his creative potential, jet setting across the globe, putting on elaborate fashion shows and dressing big Hollywood names we also (to my dismay) witness the strain his work puts on his young family, with the documentary covering details of his wife's alleged affair.
We come to the understanding that Boateng left Givenchy in 2007 to spend more time with his wife and two children though slowing down he does not as we see him pursuing projects in America, landing a reality TV show, planning the launch of his flagship store on Savile Row as well as working on his own label. Which is why it was no surprise that while filming Boateng and his wife separated, then soon divorced in 2009, Boateng in my opinion was seen to be having his cake and eating it, living the life of a rich, successful, jet setting bachelor while having his beautiful wife and kids at home waiting for the next opportunity to play happy families when his work permits it.
I felt it was distasteful that Boateng would allow the documentary to show events which exposed the cracks in his marriage, like arguments they would have over the phone, though what I found puzzling was the lack of emotion Boateng displayed in those scenes; considering his early declarations of loves for Pascale at the beginning of the documentary he didn't seem to display any sadness nor did the experience of going through a second divorce affect his work. Instead he seemed very steadfast, career focused and confident in his ability to get his children through the situation.

Asides from all Boateng's male bravado his most endearing moment was seeing him visit his birth country  Ghana and the work he did in promoting Africa's ability to produce fashion, such as the press conference held in America which had Boateng (slightly) worried since none of his celebrity friends he had planned to talk at the conference had confirmed their attendance.

The Q&A after the film was greatly uneventful, though my friend who accompanied me to the screening did ask a question but was rebuffed by co host Diane Abbott and Boateng.
Boateng wasn't any less arrogant in person then he was on screen, just the way he sat and how he spoke confirmed his feelings of self importance, which I learnt was also picked up by the Guardian newspaper in their review aptly titled 'Does my head look big in this?'.
Having been an appreciator of his work for many years, I was very disappointed to learn of Boateng's unforgiving arrogance and that the direction of the documentary was meant to be that of the male experience, with the fashion, creative process and craftsmanship sidelined to highlight Boateng's 'human side' (if he has one!). Had I known this before attending the screening I would have sat it out especially since the screening was held on of all day International Woman's day!