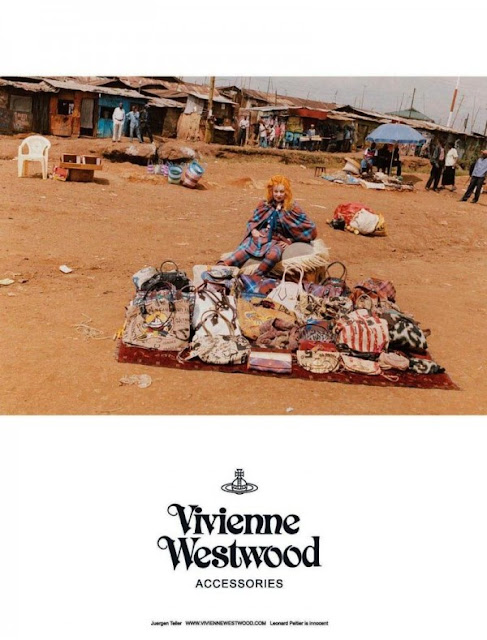 Dame Vivienne Westwood is known for going against the fashion grain, having made her name back in the 70's for bold political and social statement fashion, which is why it should come as no surprise that Westwood still possesses the ability to evoked strong opinions, with her last season campaign receiving mixed reviews. Westwood chose to shoot her entire autumn winter 11/12 campaign in Nairobi, Kenya which is where she has been working in partnership with Ethical Fashion Africa programme part of the ITC (International Trade Centre) to produce an ethical bag collection made from recycled material and support local Kenyan communities by providing training and skilled work boosting the self-esteem and economical circumstances of the local people, the motto being NOT CHARITY, JUST WORK.
Though while many disapproved of Westwood's decision to use slum African as the back drop of the campaign to sell her fashion, with one fashion journalist going as far as describing it as "poverty porn cliché", the campaign is actually very witty and offers up a satirical look at modern fashion.

While only the bag collection shares a connection to the location, I imagine that for consistency Westwood opted to shoot the entire Anglomainia campaign under one theme in Kenya by renowned fashion photographer Juergen Teller.  The campaign has many of the images of Dame Vivienne Westwood and Kenyan models Ajuma Nasenyana, Sonnietta Thomas, and Elsie Njeri parading around slum areas of Kenya dressed head to toe in overpriced outfits which I'm sure could pay for the education of all the children of a small village.  At first glance the campaign can seem somewhat obnoxious though as a collective imagery there is a level of satire which runs through the campaign, this is strongest when the imagery is focused on the accessory collection, such as the image of Westwood selling her bags on the floor (see photo above) as done in Africa.  This is quite clever imagery as it strips the selling process to its raw form, no fancy lighting or smoke screens, just the maker/seller and the product. Anyone who is familiar with this line of selling will know of the dialog that occurs in such situations, learning of the products story, the haggling, the reassurance of quality or authenticity; this experience to a non native customer evokes the understanding of buying into something of cultural importance. The bags on display have a very interesting story to tell, they have been handmade by a newly skilled and liberated workforce and made from recycled textile, plastics and metals, judging from the sense of pride displayed in Westwood's pose and presents as the seller this is a story she wishes to convey to her consumers.

What else is interesting about the campaign is that Westwood subtly coaxes the viewer to question the value of premium fashion and consumerist behaviours by making the product the focal point of the campaign imagery and by taking the product out of context. This is done by placing luxury fashion in the back drop of poverty which somewhat realigns fashion with reality instead of encouraging the consumer to buy into the luxury dream, the usual luxury marketing approach which prompts us to value and pay more for Prada over Primark. The perfect example of this is in the image of Westwood surrounded by rubbish and holding two bags one of which says "I am expensive" (see photo below), considering that Westwood’s outfit which I'm sure is also expensive seems to blend in with her surrounding enacts a contradiction in the message, questioning the products worth when it blends in with the waste surrounding.
Another way of reading this image is that this expensive bag is likely to be made from waste material such as the surrounding, therefore playing on the fact that something made so cheaply will inability be sold for more than it’s worth. 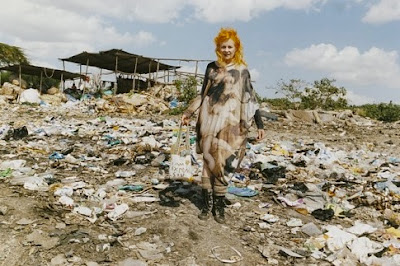 Westwood may seem like just another designer jumping on the Africa fashion bandwagon, though the rebellious nature that is the Vivienne Westwood brand has clearly been overlooked when critiquing this campaign. The designer who once declared that people should "buy less, choose well & do it﻿ yourself!" is not your typical fashion matriarch. The original anarchy of fashion Westwood established her design house by combining fashion with her political and social agendas.
From the short documentary Made with love in Nairobi made to accompany Westwood's Ethical Fashion collection, Westwood expresses her encouragement for making a difference socially through her love of producing fashion.

While it’s easy to see why such a campaign was likely to cause controversy, Vivienne Westwood is by far more reputable than other luxury fashion houses to handle such a campaign, which in true Westwood style was whimsically and handled with dignity, also it should be recognised and applauded that Kenyan models were used in the campaign as it shows Westwood level of commitment to the project in Africa, since she could have used models of a different nationality and ethnicity.

Asides from the controversial nature of the ad campaign, it is great to see a designer of Westwood’s caliber collaborating in ethical fashion practices in Africa.