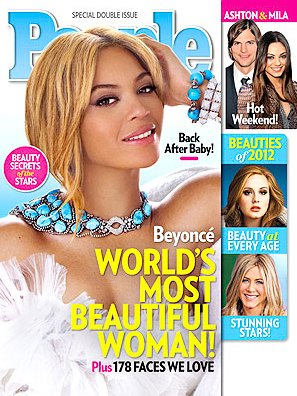 Today America’s most influential magazine, People magazine, has revealed their 2012 celebrity winner for their title of Worlds Most Beautiful Woman. To my dismay this years title has gone to Beyonce Knowles, whom I have for some time now had my reserves about because despite being marketed as this 'girl power' icon and inspirational black woman, her image and song lyrics tell a different story which only makes me question whether her presence in popular culture actually hinders black people's progress (particularly black women).

While I am pleased to see a black woman take the title, especially since it’s coming from a popular magazine, I don't think this actually counts as a real example of the white media acknowledging black beauty and valuing it over their own. Yes this is where my reserves about Beyonce kick in, of all the black female celebrities in the world, they chose to go with a mild mannered, light skinned, blonde wig wearing option. Beyonce's image is far more in line with white ideals of beauty then that of the black community she meant to represent, with her image being more attainable for white women then black women like myself with darker skin complexions.

Black women like myself are not be able to achieve Beyonce's 'tanned' skin colour (nor should we ever try!), though white women can easily with fake tan or a visit to the tanning salon; my lips are fuller then Beyonce's but this is achievable for white women as she can have her lips injected with collagen or by using any of the various products on the market said to naturally inflate the lips; also for white women to achieve Beyonce's long straight blonde hair takes the smallest of alternations, get a cut & style, grown ones hair or get extension to add length, they may also need to add colour, while for black women there is a $9 billion industry (according to Chris Rocks documentary Good Hair) to manipulate and hide the true nature of black hair.

In the 22 years the title has been handed out only two black women have ever won the title, Beyonce and Halle Berry. Only one Latin American female is said to have won and that was Jennifer Lopez in 2011, no Asian or African women have received the title yet, which only confirms that the title of 'World Most Beautiful Woman' is far from being democratic; it has no intentions to break the beauty barriers of race and I'm sure the only reason they called it the 'Worlds most beautiful woman' is so they can include non-American white women such as Charlize Theron and Kate Middleton!

The only reason the magazine has for letting a handful of women of colour win the title is because their images conforms to white notions of beauty which makes their collective image represent an exoticized ideal of beauty. This targeted at the white women who I'm sure make up most of People magazines demographic, encourages them to pursue this beauty look by buying (and supporting) the beauty and cosmetic surgery industries whom I sure make up a big part of People magazines revenue from advertisements.

Call me sceptical but the price of such narrow ideals of beauty, weighs heavy in the mind and psyche of people of colour, particularly the women since many will find white ideals of beautiful unattainable.


Past Post of Interest:
Black is Beautiful: The Devaluing Of Black Female Beauty In Popular Media