What are the odds, just yesterday evening I was having a discussion on how white authors often fail to include ethnic characters or specify the ethnicity of their characters in their writing, then today's news headlines are reporting the racist outbursts The Hunger Games fans have been unleashing on twitter due to the film casting black actors in some of the important roles.

I found the discussion fascinating since I had never really thought about it before let alone noticed that I like many others will envision fictional characters as white (where their ethnicity is not specified). Since the discussion I have been trying to recall fiction books that I've read where the characters ethnicity is actually stated and not just me making the assumption, as well as any ethnic characters which may have appeared in these books. Needless to say I found the task hard and have only been able to come up with one book (Harry Potter). 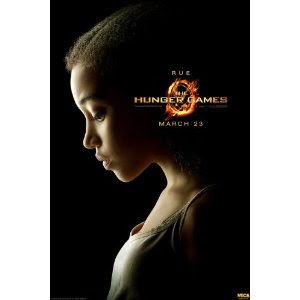 Though now it would seem this ambiguity fiction writers use to imply their characters ethnicity instead of out rightly stating it has caused quite a stir, with the press picking up on the string of racist comments made by fans of The Hunger Games who are finding it hard to digest not just the amount of black actors casted as characters assumed to be white but also whether black actors can authentically portray characters written to have integrity. Thus is the case with the character Rue being played by 13 year old black actress Amandla Stenberg, having seen the film (though I have not read the books) Stenberg's character is innocent, kind and very endearing with her death being very emotional and heartbreaking to watch, though from comments made on the social network site by making Rue black this somehow discredits her characters ability to be sweet and innocent, with comments including:

“Why does Rue have to be black? Not gonna lie, kinda ruined the movie.”

“(Ok) call me a racist but when I found out Rue was black, her death wasn’t as sad.”

“Why did the producer make all the good characters black?”

Extremely shocking and disturbingly racist comments though it does highlight that film audiences (as well as Hollywood) still hold racist perceptions of the black presence in film, with those that hold these views being more comfortable seeing Octavia Spencer play a 'feisty' maid to white employers (see recent post Hard Being Black In Hollywood, Try Being A Black Women) over Stenberg playing a well mannered, kind spirited, sweet and innocent young girl.

While I can only assume from the comments made that The Hunger Games author Suzanne Collins didn't specify the ethnicity of her characters, otherwise I'm sure the film's bosses would not have casted the character Rue to be black; it does bring to light how our default ethnic setting seems to be set on white. This white by default line of thinking is the privileges of white supremacy, it's what makes us generally assume that someone with a 'western' name or an ambiguous fictional character in a book are white since not specified otherwise; it’s also what has made us blasé to images of a Britain whitewashed as done on the ITV programme Midsomer Murders or the film Notting Hill.

The harsh reactions towards the casting of The Hunger Games has made me question whether literature needs to be censored more, I'm not saying we should apply over the top political correctness to publishing though why is it that we allow books to perpetuate this racist notion of whitewashing its characters (by default) yet we don't stand for it in films and TV without speaking out? It’s also important to point out that The Hunger Games is aimed at the teenage market, therefore by allowing such books to propagate this racist notion to our youth then as adults they’ll grow inclined to this way of thinking.