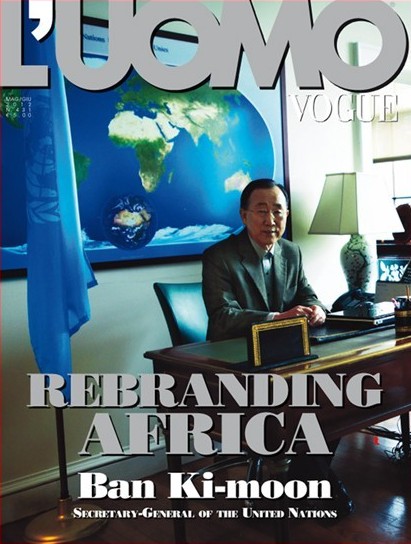 Is it just me or is the front cover of L'Uomo racist and offencive?!

Taken from the upcoming front cover of Vogue's L'Uomo magazine May/June 2012 issue which is dedicated to Africa the front cover sports Ban Ki-moon the Secretary-General of the United Nations pictured in an office where the only reference to the continent or its cultures is an atlas on a board behind Mr. Ki-moon!

Yes this is very racist and offencive since according to the magazines website for this issue "We’ve photographed influential personalities such as Presidents, First Ladies, and Queens, but also artists, writers, musicians, designers and models: they are the evidence that Africa is developing and progressing..." so why didn't they use any of these directly African images on their cover instead of this sterile and imperialistic image which unlike the intent of the issue does not "show how this continent is moving and developing." Instead the cover with its caption 'Rebranding Africa' gives the idea that Africa is still as wild, uncivilised and unsophisticated as when Europe invaded it all those 400 years ago and that now under new management (or new colonial masters) will be taking steps in the right directions.

It's sickening that a issue dedicated to Africa's 'development' can't even warrant an African on the front cover. While I am yet to view the issue when it comes out I can only imagine that the rest of the issue will be as racist as the front cover capturing Africa from an imperialistic gaze.
I guess it doesn't come as much a surprise that this is a Vogue Italia offering, the same people that gave us the Black Vogue and the 'slave' earring incident! - Not impressed and I'm starting to find their arrogance grating since they seem to have no honest intentions but simply meddle in black and African affairs for self gratification, someone give them a book on racism quick!

What are your thoughts?

Past posts of interest: