'Slave Chic' Is In Fashion 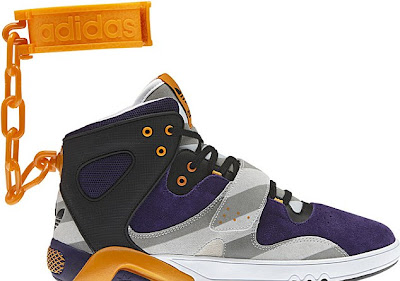 How this slipped through the net I don't know, but this is just ridiculous!

Controversial Adidas trainer with bright orange 'shackle' style ankle cuff, causes a lot of uproar. Many are linking the trainers ankle cuff to the shackles worn by African slaves during slavery and its bright orange colour to American prison wear.  It's not hard to see why these connection has been made, the chain and shackle has very negative connotations and symbolise physical restrain and oppression. Not exactly appropriate for a trainer!

Need I say that Adidas came to their senses and dropped the shoe, though this comes after previous attempts to defend it! The trainer was part of the sports brands collaboration with designer Jermery Scott, though it still gets me that those involved in the development of the trainer really thought it would be clever or 'cool' for people to be walking around wearing shackles around their ankles like a criminal or slave.
Personally I find it very irresponsible of Adidas, especially considering the brands strong association with black culture, artists such as Run DMC and Missy Elliot are famed for wearing and supporting the brand. Between 400 years of the slavery and the high incarceration rates of black people, it is both disrespectful and inappropriate of Adidas to have tried to glamorise something that is very much still a source of pain and angst to a demographic that not only helped make the brand but also buys into it!?

While I must admit I do find some irony in the footwear with it making the wearer a 'slave to fashion', the trainer was intended to make a social or political statement and is definitely not appropriate for mass production.

Between this Adidas offering and the Vogue Italia 'slave earrings' nonsense last year, it would seem this 'slave chic' could really be picking up steam. I can't understand why since it is deeply disrespectful and offensive. Though it would show their is no limit to the commericalisation of blackness, some people clearly do not have any morals or sense decency?

For those not familiar with the Vogue Italia drama, last August Vogue Italia posted on their website the trend of 'slave earrings'. Pretty much just large hooped earrings though Vogue felt it necessary to connect this style with slavery. 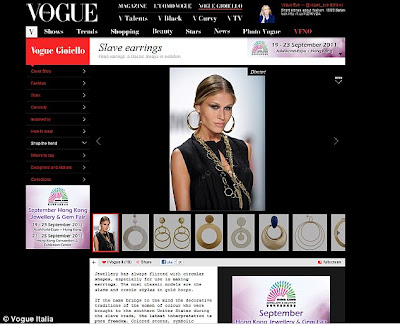