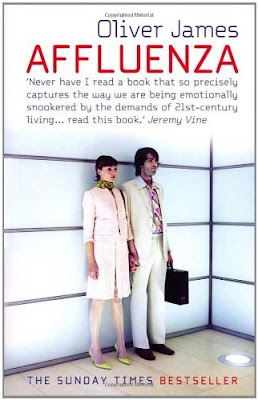 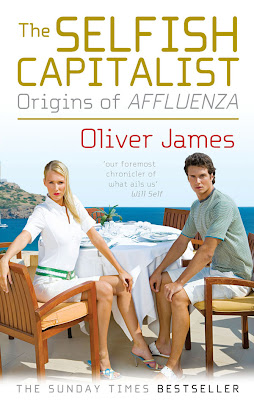 If there could be any book(s) I could take credit for writing, these two books would be it!

Oliver James, a British psychologist and journalist, writes about the unhealthy culture our society perpetuates and its side effects in causing emotional distress, poor relationships and warped sense of identity.
In reading both books I felt a strange sense of relief in knowing I wasn't alone in my observations of the world around me, and the false pretences our current model of capitalism spoon feeds us.

James who coins the term Selfish Capitalism discusses in both books how the political policies and ideologies of Thatcherism and Reaganism has completely changed the ideals and culture of English speaking countries. Selfish Capitalism, which was implemented during the Thatcher and Reagan era has continued to be nurtured by later governments, promotes selfishness and greed over altruism, it also substitutes emotional wellbeing with the need to consume. All of which make the rich richer and the poor, poor.

Affluenza is James' first book on the topic, the books direction pulls from James' background as a psychologist. In Affluenza, James travels the world interviewing people from various countries such as Singapore, the UK, America, Australia, China, etc, to understand the levels of emotion distress felt in these societies and to what extent it is being caused by Selfish Capitalism. We see that Selfish Capitalism at present affects English speaking countries with the highest rates of emotional distress; using various credited studies and personal accounts, Affluenza raises valid argues as to why Selfish Capitalism is the true cause of this.

The Selfish Capitalism follows on from Affluenza and greatly focuses on putting forth a coherent argument to validate James' notion of Selfish Capitalism. Again discussing the political ideologies Selfish Capitalism stems from; various political, scientific and psychological studies; as well as the works of theorists and sociologists. James drums home how, too much extent, we as people and our establishments have been brainwashed to not just believe but populate Selfish Capitalism! I real eye opener, James leaves no stone unturned, discussing issues of parenting, body image/beauty, education, to the 'war on terror'.

Everything I had already been thinking about the condition of our society was discussed in the books, providing me with evidence and references to back my thoughts and (James') theories up.
I also appreciated that James acknowledged throughout the books, that too much extend he is not qualified to extend all his findings and theories as 'the be all and end all', though in publicly offering his opinions he hopes more alternative and radical ways of critiquing, analysing and defining our current model of capitalism will begin to immerge.

Both books are must read, though The Selfish Capitalism more so since it gets down to business and discusses the issue at hand. I did at times of reading Affluenza question James' choice in the people interviewed and in his accounts of the social interactions between him and his subjects, though I think any research of this variable is open to such scrutiny.
Bottom line is, for an informative and critical perspective of our current capitalist model, especial in light of the current financial crisis. Affluenza and The Selfish Capitalism are must reads; Oliver James has written both books well and shown great passion and intellect. He is definitely on my fantasy dinner party attendee list.

Take the Affluenza quiz (not the same one found in the book):
Are You Escaping from Affluenza?
Labels: Book Review Culture Politics World Affairs