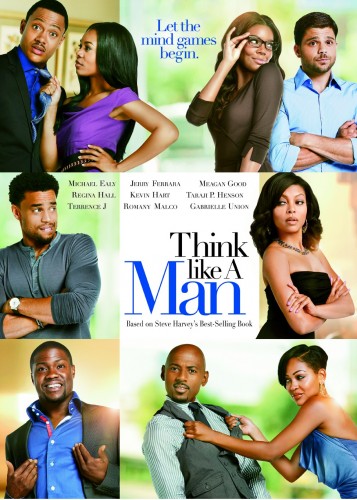 It’s very rare that the UK cinemas allow black American films to get UK screening (you need only think back to the Red Tails drama), so imagine my excitement when hearing that the film Think like a Man would get screened in the! Obviously it would be one of them blink and you've missed it screenings, in only selective UK cinemas and shown in the cinemas tiniest screening rooms but if you got/get the chance, the film is well worth seeing.

The film was excellent, one of the best rom-com's I've seen in ages. Light hearted, endearing and just plan funny, I could not help laughing out loud in the cinema.
The story basically follows 6 men and 4 women, with 4 of the guys involved or get involved with the 4 women. Each have very different dating personalities, we see the women (and 1 of the men) use Steve Harvey's dating book to get better relationships. Though obviously things don't go according to plan and the men wise up to the women’s ways and attempt to turn the table on them. What I loved most about the film was that in the end the happy ever after is only achieved once both the guys and girls stop playing games and are simply honest with one another.

I wouldn't say this was the 'moral of the story' it was a nice ending and bears truth to real world relationships. The film to me was just light-hearted fun, for both men and women of dating age (and experience). While it was mostly an all black cast and contained some 'private jokes' its one of them films any race can appreciate.

After watching the film I became curious about this Steve Harvey book and the advice it contained, did it really have the advice that was used in the film? Did it really talk about 'momma’s boys' and 'strong, independent and lonely women'? I just had to read it for myself and scrutinise it to pieces. 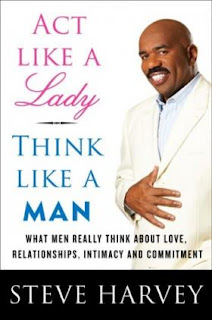 Well that the intention, I mean how dear Mr. Harvey tell me to 'act' according to sexist standards placed on women. That only particular behaviour will warrant me a 'lady' and grant me 'respect'. Also it bothered me that Harvey felt women need to 'think like men' to get what we want, why can't they get on board with our way of thinking?
Basically when I got the book, I was all too ready to put my feminist hat on to ridicule it in the name of all women, but instead I ended up liking it and enjoyed reading it!

For a start, the intention of the book wasn't to chastise us women and tell us how to behave in order to get and keep a man; instead it gives you the male perspective on dating and relationships. How a man thinks, how a man loves and why a man behaves the way they do. What Harvey is saying with the book is once you know how a man thinks; you can use this to get what you want out of him, nothing more nothing less. At the end of the day if you don't agree don't follow it.

I found the book insightful none the less, I think it's important to try and understand other peoples perspectives and where their coming from even if you don't agree. I mean I didn't agree with the ego stroking said to be required to maintain a relationship with men, though from personal experience this comes naturally with any good relationship. What I’m saying is if you appreciated someone you'll naturally say and show this anyway, be it the guy in your life that sorts out you DIY or buys you nice thinks, to the guy at the office that always helps you fix the printer when its jammed. You’ll show your appreciation because you’re grateful (and will want them to do it again, lol) - ego stroking!

I was surprised to read that many men find validation in conforming to socially constructed ideas of manhood, from earning and providing for the family to being the protector. While to some extent is kinda makes sense, I need to put the book through its paces and start talking to males I know to gauge how much truth is in the book. I mean do British men think like this, as the book is American?

The book is not going to be for everyone and I'm sure many women will disagree with it for many reasons, but I can't discredit it. I found it informative and will definitely (try and) remember it when interacting with the opposite sex, if it helps me to form stronger bounds with them great, it'll comes at no extra cost to me. I get to keep acting 'like a lady' but just know how to 'think like a man', lol.
Labels: Book Review Film Gender Politics