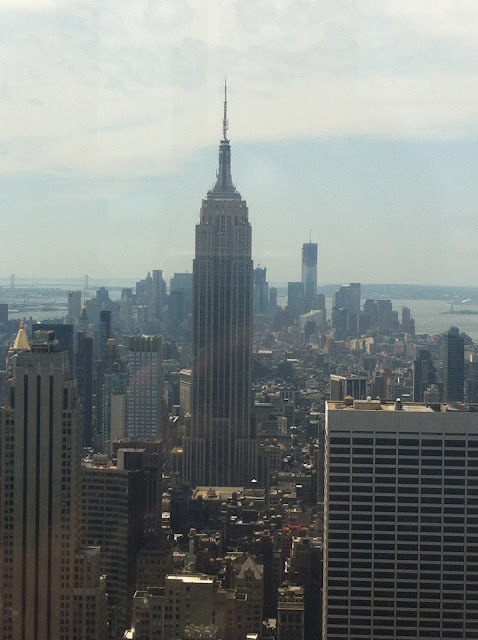 In avoiding the UK's Jubilee celebrations last month, myself and two friends took a fun filled city break to the boldest city on the planet, New York. Being my first visit to the city I didn't have much expectations nor did I have any must see sights planned on arrival, though to my pleasant surprise, I found a whole lota (black) history and culture in the city, so much so that I really didn't wanna leave.

What I am now calling my second home, New York is ethnically diverse and has a rich history.  I visited all the usually tourist attractions such as the Empire State, Time Square, Madison Square Garden’s (which was closed) but my most memorial visit was without a doubt the African Burial Ground. Who would have guessed there was an African burial ground slap bang in the middle of Downtown Manhattan?! I didn't nor did any of my friends who where recommending me places to visit. In all my days of watching imported American TV shows, I have never once seen Carrie (from Sex in the City) walk pass the site, or Joey & Chandler (from Friends) hang out by the memorial! Instead I was alerted to it by chance on the Time Out app for my iPhone, for obvious reasons it’s made me curious.

Situated not far from the 9/11 memorial site, the African Burial Ground is a protected site housing a museum and memorial dedicated to the first African slaves burial on the plot during the early 1700's. The history of the site is absolutely amazing and so was learning of the mixed attitudes of the New York residents upon discovery of the site. Not to give too much away as you HAVE to visit and experience it for yourself, the bodies of the slaves were exhumed and given a traditional African burial, though amazingly before the site was acknowledged in 1991 it had housed numerous buildings in its time!
What made the visit was the great museum staff, our guide answered all my questions and his dry humour and ability to reel off endless pieces of information about the site and American slave history was much appreciated. Though sadly from the conversation I have with the staff, I got the impression that the site is under-acknowledged, which is just crazy considering its location!

While it doesn't surprise me that there might be little interest in learning about New York's black history. With the site being slap bang in Manhattan and not the city's suburbs, seems to me like a crime that those visiting and getting to know Manhattan could leave out the African Burial Ground!


Other museums I visited were the Metropolitan Museum for my fashion fix (they has the Else Schiaparelli and Prada exhibition going on) and the Guggenheim Museum for modern art. While there where so many other museums I wanted to visit, I just didn't have enough time to fit them all in.
I also visited the Bronx, Brooklyn and Harlem (which I loved). In Harlem I had to pay a visit to the Schomburg Centre for the research of black culture, their archives where extraordinary.  Would have loved to have spent more time nosing through their archive, though my half a day at the centre was well spent learning about Marcus Garvey. Having found out while I was there that he used to live in Harlem, I read through US newspapers which dated back to 1910's-20's, I read his speech made in London and learnt other fascinating facts about his life.

I found New York to be not too dissimilar to London as they both have the same components, the tourist friendly main streets; the pricey trendy parts; the cool urban side and the residential areas, etc, just on a much larger scale. On a whole the experience was something special and I can't wait to go back and immerse myself in more of the city's culture. Though if I was to advise anyone going to New York for the first (second or third) time, it would be first and foremost to visit the African Burial Ground. New York has so much history and culture (and not just of black variety), see as much of it as you can cram in.
Labels: Culture History Race and Identity Travel World Affairs