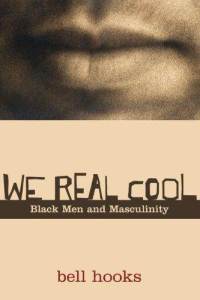 We Real Cool take's a deep look at black masculinity and offers up a fantastic critical analyst of the pros and cons of being a black male in the US.
Hooks acknowledges early in the book that as a female her view point on this subject maybe subjective, though We Real Cool is written with much intellect and heart. It is with great passion for her black males that Hooks writes with, saying that the lack of critical writings on the subject by black males was the catalysis for why she wrote the book.

The book is a real eye opener on the issues and daily assault out black males face and easily related to black males in the UK. Hooks dicusses black male incarceration, Hip-Hop & gang culture, black male misogyny and absentee fatherhood. As a female reader the book spoke volumes to me, and in usual fashion Hooks drew from her personal experiences and relationships with black males when writting the book. This not only helped draw parallels between the black males in my life (i.e. father, brother, boyfriend) but highlighted the important difference gender plays in the struggles of being black in white supremacy capitalist culture.

I also really appreciated that Hooks raised the discussion of the emotional abuse black boys endure during their childhood; this is something I have been thinking and saying (but maybe not so eloquently) for some time now. Hooks identifies that from an early age black culture/parenting denies black boys their right to be emotional beings, whether it’s by stopping them playing with dolls or role playing, to telling them not to cry and to be tough. Black boys are denied their emotional development for the sake of 'being a man'.

I found this most insightful and also saw this as a solution to the progression of a healthier black masculine ideal, since as a woman and (potentially) future mother I have the power to instil change simply by the way I raise both my boy and girl children. This I felt was a powerful message since it shows that the catalysis for change is in the hands of black people and that until we address the root causes of the issues our black boys and men face, we can't expect any different. This is not to say that black women are the cause of the issues faced by black males, nor is it only black women that can induce change. Black men have very much been the deciders of their own fate, which Hooks looks at by taking the argument back to slavery, the organising of anti-slavery campaigns by black figure heads (such as Du Bois) and the black power movement.

I would definitely recommend the book, though I'm not sure how black males will perceive it as I feel it may read to them, more as a plea from a black sister to her black brothers to seek help in managing and understanding the mechanics of their oppression. Though, this isn't necessarily a bad thing. Hooks does stress in the book the importance of black masculinity being critiqued by black males, which I totally agree. I was also pleased to read that Hooks discussed works by Professor Mark Anthony Neil in book, as I am an avid follower of his blog New Black Man.