Event: Is Race Really the Dominant Factor in Sprinting Prowess? 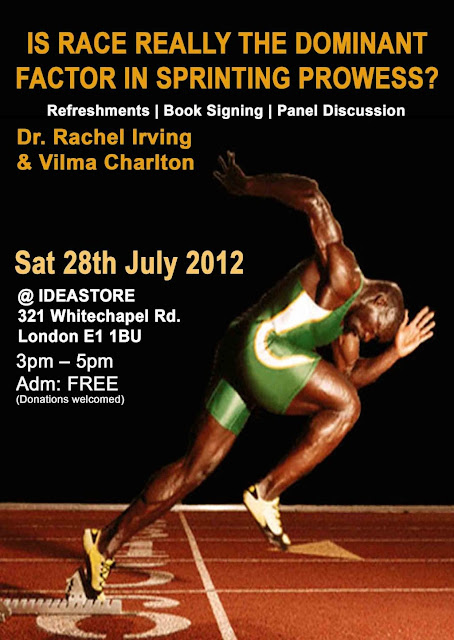 I know that the London Olympics is all done and dusted now, with the countdown to Paralympics in sight. Though while Bolt made history with his second Olympic win in the 100 metres sprint (achieved only my Carl Lewis), the discussion of black peoples presence in athletics (namely sprinting) has been the most popular topic of the Olympics.

Michael Johnson's documentary for channel 4 could be seen to have started the discussion off (or at least raising it publicly). Survival of the Fastest, to my dismay, opted to draw parallels with the world’s fastest black athletes and their country of origins connects to slavery and the slave trade. The show focused solely on male athletes from America and Jamaica. It also lacked substance since the show only offering up slavery as the reason for black people’s success on the track. The show's theory was (loosely) backed up by the work of Jamaican geneticist Dr. Rachel R. Irving, who has spent many years analysing the DNA of Jamaica’s top athletes.

Not best pleased with Johnson's TV offering and the continued ignorant debates which followed, I attended a London event just before the start of the Olympics where none other than Dr. Rachael Irving and Vilma Charlton, of the Jamaican Olympic Association, spoke candidly about the science of sprinting and if race really is a dominant factor in sprinting.

The answer to the million pound question is 'its complicated', while yes being black may give you an advantage in running, the reasons for this are just as much about ones environment and culture as opposed to our DNA.
Irving and Charlton explain the scientific breakdown to what makes a good sprinter, with indicators such as height, weight, anatomy, genetics, environment and culture all being in most cases the general rule to for good sprinters (though there are always exceptions to the rule). With this frame work both Irving and Charlton ran through how and why black athletes, particularly Jamaicans, have the advantage.


Firstly the controversial stuff, DNA research. While this is a very tricky area in science to enter into, there is no denying that racial categories exist, therefore research is needed in understanding the racial properties in the different races/colours nature intended us to be. Personally I'm all for race DNA research (within reason), as I strongly believe that a good understanding of ethnicities and it diversities is detrimental in the flight against racism.
According to Dr. Irving, geneticists has identified a 'sprint gene' which can be found in all of us, though depending on the levels it exists in us is what determines whether we could be the next Usain Bolt or Shelly-Ann Fraser-Pryce. Much of the science of this 'sprint gene' went over my head, though the basics is that this gene enables a more efficient lung and muscle capacity, which comes in very handy if your a sprinter.  The controversial stuff is that black people generally test to having higher levels of this in comparison to other ethnicities. Interestingly enough this gene is said to be traceable to West Africa, which means that Caribbean and American top sprints will have had to have come from a near pedigree lineage of West African descent!

Though this is just one string in a sprinters bow, potentially having the 'sprint gene' can mean nothing if anatomically you’re not built to run, or if your culture and environment are not correct.
What is meant by environment is landscape, apparently more natural environments work in sprinters favours, it is said that Bolt's early surroundings of fresh air and the hills and pains in Jamaica’s Trelawney county helped nurture his sprinting capability. Another important factor (which some would say is the most important factor) in Bolt, Blake or Powell’s sprinting success is culture. While America endorses American football and England endorses football, Jamaica endorses track and field.
Running is a very big part of Jamaican culture, with Jamaican youth’s par taking in the competitive sport at very early ages. It’s also important to note that like American football and European football, track and field in Jamaica has the potential to give misfortunate youths 'a way out'; this can play a big part in the motivation of black athletes.

It is with this that we can understand why Jamaicans in particular are good runners; it’s also helps to explain why their West African counter parts don't do so well in the same category. Its not that West Africans can't be good sprinters it’s just that they don't nurture it as much as Jamaicans do.
Other cultural traits that can be a factor in sprinting is diet, the dietary habits of Jamaicans such as yam, various other root vegetables and fresh fruits are meant to support sprinting ability.


The event essentially wrote the wrongs of Johnsons TV programme, instead of telling the audience why Jamaicans/black people are fast it let you make your own conclusion based of the scientific facts, observations and theories formed by professionals in the field. I also appricated the section in the presentation which discussed athletes of Jamaican origin who run for other countries, such as Linford Christie or Ben Johnson. This I felt made the talk not just more objective but also more credential.

For a girl not particularly interested in sports, I left the event feeling like one clued up spectator, I learnt about the art of running, the science of running and also that the world’s fastest man Bolt, does not typically fit the sprinter profile yet his performance on the track speaks volumes.
What I took from the talk was that it may be possible that black people are genetically predisposed to be better at pyhsical tasks such as sports like running (though more research is needed to satisfy me), though one cannot rely on DNA alone. What gives Jamaicans the upper hand in sprinting seems to be a combination of their environment and culture, which not only nurtures sprinting but also provides motivation and determination for their athletes.