The Fashion Press Picks Up On Dolce and Gabbana's 'Racist' Earrings, But Are They Really Offensive?

According to the design duo who are known for using their cultural heritage as inspiration for their collections, the black female faces represents Sicily's history of African moor settlers from the 10th century and fits into the collections use of other Sicilian cultural references.
Many of the articles focusing on these 'racist' earrings explain that this 'mammy' or 'blackamoor' looking jewellery are derogative and serves only to romanticize slavery. I'd care to disagree! 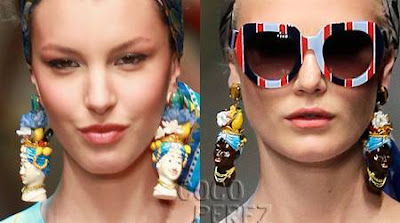 With all this fuss over the black female face on these earrings the press seem not to have noticed that the earrings also came with white female faces in the same style. Clearly the image of a white female draped in fine jewellery and wearing a head dress is far more digestible to the public consciousness then that of a black female. I see no reason why the image of black people pre-1900's should automatically be racist nor should it need to automatically link to slavery as not all black people where slaves nor should slavery be the only historical era to define black people.
Having said this, if these journalists knew anything about the history of racism they would know that the 'mammy' character is a African American house slave who were burdened to serve the needs of their white masters, raise their children and maintain their homes. While the mammy image is tied to that of a black woman in a turban, never have I seen one draped in fine jewellery with adornments on their head wear!
Also the the discussion of the 'blackamoor' resemblance is a whole different argument altogether since this movement/era was not offensive solely for its depiction of black people but that at the time it served to exoticise black people and culture. Not that we are any more responsible to digest this type of imagery today but the image of black women traditionally dressed and beautifully adorned with jewellery doesn't need to be derogative. In fact these types of imagery are traditionally celebrated in parts of the world like Brazil's Namoradeira ladies or the tradition historical dress of any Caribbean country. 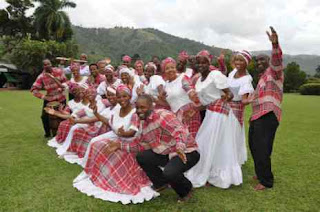 The Dolce & Gabbana earrings of a adorned black female are far less racist and far less offensive then Vogues 'slave earrings' trend (see past post entitled "'Slave Chic' is in fashion"). Also the earring can be seen as a positive image of black women since their appearance in a collection inspired by Sicilian culture dares to highlight the black existence in Sicily and its contribution to the country’s history and culture!
I'm not saying Dolce & Gabbana are off the hook so easily as I am always sceptical when Western fashion designers use non-Western cultural reference in their collections. Though while the Dolce & Gabbana earrings do not offend me the collection as a whole doesn't particularly sit well with me. Though branding the designers and/or their collection racist is going a bit too far.


Going back to my earlier point made, with all the fuss the fashion press seem to be making over these 'racist' earrings that debuted during the middle of Milan Fashion Week (18-25 September2012) why is it only now (during Paris Fashion Week I might add) that they feel the need to kick up a fuss, whats with the delay?
I find this delay quite interesting since it really shows our societies misguided racial consciousness. The fact that none of the fashion journalists present at the fashion show spotted the racially sensitive references in the collection in time to publish it in the collections early runway reviews though felt it important 3 days later to pick up on clearly shows the press' blase view on issues of racism. - And not very good journalism I might add!

The discussion I feel the fashion press need to be having in regards to this collection isn't whether the earrings are racist but whether the collection itself is appropriate or tastefully done? Labelling people racist doesn't help to eradicate racism nor does it help to identify the racist behaviour that needs to be corrected. Instead by labelling the Dolce & Gabbana earrings racist could be sending the message to other designers to avoid using positive historical imagery of black people in their collections in avoidence of being labelled racist!

What are your thoughts, are the Dolce & Gabbana earrings racist?