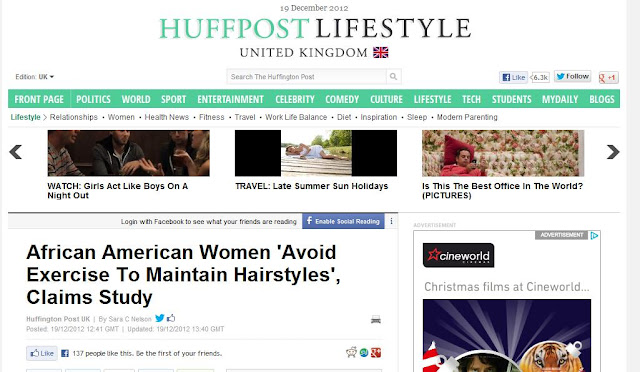 It’s been a long time since I've read something that made me really angry and deeply annoyed, and this is probably more down to my ability to avoid offending articles then intelligent journalism!
So imagine my annoyance when I spotted on my Twitter timeline a tweet by Huffington Post UK declaring that "40% of African-American women avoid exercise because of concerns about their hairstyle, a study has found".

According to the article a recently published study in America has identified that 40% of African American women purposely avoid exercise to maintain their costly hair styles. The study which used (only) 103 African American women participates between the ages of 21 to 60, consisted of a 40 question questionnaire and was led by dermatologist Dr Amy McMichael.

While it’s not the study per say that put me in a fit of rage, it was the clearly irresponsible and quite frankly racist journalism that got me in a huff (no punt intended). I mean what value or interest does this American study hold for the UK public, apart from supporting racist stereotypes of overweight black women, with extreme obsessions with their 'strange' hair.

It was mentioned early on the article that the study is said to 'fuel concerns about the obesity epidemic in the United States.' Though what 'concerns' this study actually fuels the article (I believe) is intentionally ambiguous. Considering the article focuses solely on African American women surely this would imply that this group/race of people are potentially at the bulk of this epidemic.

It was irresponsible of the article to imply that a greater reason or cause of obesity exclusively within black women is down to vanity of their hair when the study quoted was far too small to confirm this. Yet the article had no problem highlighting the amount of money and time African American women spend on regularly maintaining their 'coarser' hair on 'time consuming' processes which makes their hair 'incompatible' with heavy exercise.
It is this tone that makes the article highly racist, since it intends to imply not only that black women's vanity over their hair is more extreme to that of their white female counter parts but also that the very make up of their hair hinders their ability to take up exercise.

Clearly those at the Huffington Post failed to notice all the brilliant black female athletes that par took in this years Olympics, with the likes of British boxer Nicola Adams, American sprinter Allyson Felix to Jamaican swimmer Alia Atkinson all proving that their hair need not hold them back.
What does hold black women back is the ignorant cultural perceptions of black hair and it exclusion from beauty ideals. I took much offensive in the article's description of black hair as 'coarser hair', I mean how dare they there is nothing coarse about mine or any other head of afro hair! Though it is with this segregated way of thinking about black hair which made Viola Davis' appearance on the read carpet with her natural hair exposed seem so revolutionary, it is also what clouded Gabby Douglas' Olympic gold medal win.

This ignorance to consider it a valid reason that obesity in black women could be largely down to race and our biology instead for the same reasons why other races of women may become obese is racist.
The article concluded by quoting an American magazine whom had also spoken about this study's findings though they had dismissed this hair vanity as being an excuse exclusively used by black women for their lack of exercise. While it is clear this was an attempt to 'balance' the articles argument, the use of a few lines to counteract its entire article of its racist connotations just didn't cut it.