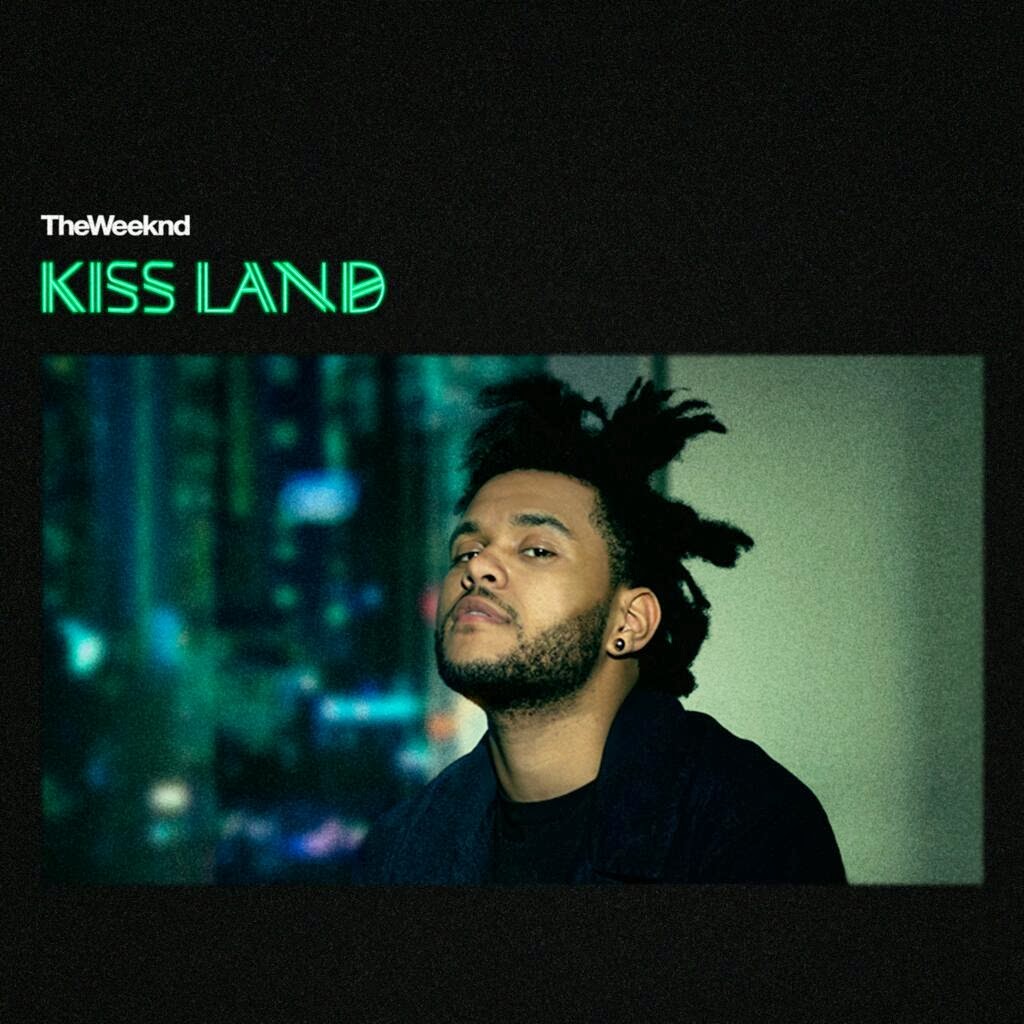 Surviving critical acclaim and international success, The Weeknd released his second commercial album, Kiss Land. Which is a pretty good follow up to his debut album, Trilogy. Though, when listening I have the sticky feeling that (some of that) fame has gone to his head.

I have loved this guy ever since hearing his first album, and have happily labelled him a musical genius (see the post Music Review: The Weeknd Trilogy). Though, while I enjoy the sounds and rhythms of Kiss Land, something about the lyrics this time, doesn't sit right with me. This may have something to do with the fact that I've seen my musical marvel in concert, and had my fantasy of this beautiful, tortured soul, replaced with a young, energetic, male product of his generation - not to emphasize on my age (I'm not that old, really), but he exhibited about the same level of maturity I'd expect at a Chris Brown or Drake concert. - Not that there is anything wrong with this, it's just that I was surprised to realize that this music comes from a young man who is clearly as invested in the  male bravado culture, as his contemporaries.


Though, it's not simply the case of realizing that the raw, honest and tortured soul, I discovered through the melodies of Wicked Games, The Zone and Rolling Stone; is not so tortured after all. Since in my opinion, he performed every song flawlessly. But I guess, what I was witnessing was this young man 'winning' his fight with masculinity, with success being the best form of (pain) relief to disgruntled feelings towards masculinity.


His music to me, still exposes the dissatisfaction felt performing to masculine defined gender roles. But like his stage performance, Kiss Land seems to say that he loves it (well when he's winning away)! It is in this paradox that I can appreciate the second album, as Kiss Land exhibits the same feelings of emptiness and debortuary that the album Trilogy was rife with.  Though, what is different (or different to me) is our young Abel Tesfaye persepctive, as he seems to have embraced his new found status and fame.

If you listen to the song Kiss Land, for which the album has taken its name from, the opening verse goes:


When I got on stage, she swore I was six feet tall
But when she put it in her mouth she can't seem to reach my (ball, ball, ball) Ballin' ain't an issue for me, I'll make a hundred stacks right back next week

While this opening line doesn't sit well with me, it does however show a shift in the character of The Weeknd. Clearly not a 'virgin to the game' (The Morning, Trilogy album), The Weeknd no longer has to sing about working hard to be able to play hard, because he's made it now, and like he says he'll 'make a hundred stacks right back next week'. Clearly, the promises of achieving masculinity has no end, as The Weeknd seems pretty confident that his winning streak won't wane out. The song also goes on to say:


I got a brand new place, I think I've seen it twice all year
I can't remember how it looks inside, so you can picture how my life's been
I went from starin' at the same four walls for 21 years
To seein' the whole world in just twelve months

What's a little bragging amongst friends! Clearly The Weeknd is not oblivious to his popularity and success (nor is he shy about admitting it), which is why Kiss Land the album, can be read as a new chapter in The Weeknd's journey, of a heterosexual male achieving the ideals of contemporary masculinity - being a Rock Star! This 'Rock Star' lifestyle, in all its guises, always whittles down to money, power and sex, three clear themes embroiled in the song Kiss Land, which is very telling, since the album takes its name from this song.

Fortunately for us The Weeknd has not lost his insightful ability to objectively critique (consciously or unconsciously) his life through his song lyrics. Which is what, in my opinion, makes him such a creative genius. While still heavily invested in the partying, drugs, meaningless sex and prostitution (in all meanings of the word). Kiss Land the album, can be seen to neither glorify nor out rightly reject male heterosexual social norms, as like The Weeknd's first album, Kiss Land exposes the unhealthy nature of male heterosexuality.

Take the first single off the album, Belong to the World. Here we see that The Weeknd continues to expose feelings of dissatisfaction, loneliness and emptiness. Since we can say that masculinity denials the male character its right to be an emotional being, the song's lyrics confirms this, as he says:


[Verse 1]
I know you want your money, girl
Cause you do this every day, okay
The way you doubt your feelings
And look the other way
Well, it's something I relate to
Your gift of nonchalance
Nobody's ever made me fall in love
With this amount of touch

Similar to the song, Wicked Games, we see the exchange of money for moments of intimacy, and also that 'love' becomes a byproduct of this exchange. While it is very unlikely, that what he is feeling is really an authentic expression of love. It is interesting that he seems to be able 'open up' emotionally, in a situation where he holds the dominate position. Not only is he paying for a 'service', he also revels in her attitude towards this (more then likely) demeaning situation, or what he describes as her 'gift of nonchalance'.

In the hook, it is revealed that he does not (mis)treat her right. Which, I guess, is indicative of his state of mind, but also how his behavior is a divergence from masculine norms. The line 'but you belong to the world', is also intriguing, as while it's unsure what makes her 'belong to the world' (is it her job? And if so, should she choose to stop will she stop belonging to the world?), his desire to 'domesticate' her, seems like another transaction only this time its infers ownership.

Personally, I think this can be interpreted in 2 ways, you can see this as the norm for male/female relationships, were in which the female is objectified to property status, denying men and women the ability to truly embrace one another equally. Or you can see it in relation to sex work, were in which the woman loses 'value' in being a suitable mate, due to her choice of work.

Though, however you choose to interpret The Weeknd's lyrics, there is no escaping his unfulfilled need for (authentic) female intimacy, on this album. Which, interestingly enough, it seems he denies himself of, in order to perform the Rock Star role. We see this occur in songs such as Adaption, The Town, Live For, and (my favourite) Tears in the Rain. Which all exemplifying in their lyrics, how he has sacrificed female relationships for fame, but also how fame and masculinity (despite their downsides) are the only relationships he sees as worth embracing, since women essentially are never in short supply.

For example, in the song Adaption, the lyrics read:

Kiss Land does not disappoint, the melodies are smooth, his voice is sensual, the lyrics gory, and honest, all drawing you into his world, which his music so well creates. The Weeknd maintains that unique quality that made him a success on his first album. Though its very clear on this album, that he is in a different place than where he was in making of the Trilogy album (which was actually released as 3 separate mix tapes).

He's living what some would call the (male) dream, the one where bro's come before ho's, where money, fame and power are the only successes a man should aspire for. Women are reduced to nothing but their genitalia, and when what you want from them doesn't come for free, paying for it becomes an acceptable option.

This of course is not the only notion of masculinity on offer, though, it is a dominate notion within popular culture and/or youth culture today. While of course, this goes against my feminist principles, I still remain impressed by the contradictory and 'breath of fresh air' honesty that The Weeknd's music takes on. As he is able to objectively reflect on his heterosexual masculinity in a way which undermines it, but at the same time - bizarrely - is seen to validate it!

To me Kiss Land confirms, in relation to discussions of black masculinity, how conformity to heterosexual masculine gender roles, are done in the belief of a an ultimate reward/payout. That achieving masculinity, will provide one with the ultimate feeling of satisfaction, or reach an ultimate state of orgasm. Why else would men like The Weeknd's deny themselves of the intimacy they truly desire for money/power/fame/male camaraderie (etc.), when it only leaves them feeling empty?
Labels: Culture Mens Studies Music Popular Culture Race and Identity Sex Sexism