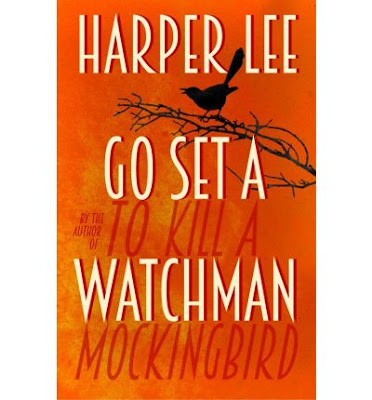 A profound and beautiful story filled with both life wisdom's and relevance to the race relations occurring presently in America.

I had my reserves about the release of this book, which were obviously fueled by the media commentary surrounding the announcement that this previously unpublished work by Harper Lee would now be published without her knowledge or consent. Though now having read it, or to be exact listened to it as an audiobook, the thought of depriving the world of this novel would have been far worse a crime!

I am not going to argue ethics in the case of the book's release as its contents in far more significant, especially for an America grappling with the harsh reality of its long complex history and relationship with race and racism.
The story is set 20 years ahead of Harper Lee’s first famed novel To Kill a Mockingbird, and is apparently the first book Lee actually wrote. As it is said that after reading Go Set a Watchman her publicist instructed Lee to go write about the event that made Jean-Louise (aka Scout).

Scout has grown to become very much the woman we’d excepted her to be, having since left Maycomb, Alabama to live in New York. The story follows Jean-Louise on her annual trip home, though this homecoming will stand to impact Jean-Louise’s world forever. In an attempt to not give too much of the plot away, this return to Maycomb occurs around the early stages of the Civil Rights movement, and will again see Jean-Louise come to terms with the realities of racism and Southern living. Though this time she stands realise that she and her father Atticus are poles apart in thought.

There has been lots of desolation expressed by the idea that Atticus is racist. I found this reaction most interesting prior to reading the book as its oversimplifies racism to the either you are our you ain’t logic. Like if you could test for racism you’d either pass it or fail it with no thought or consideration to the expansive grey area in between! Though since reading the book I realise that it is this that makes Harper Lee such a brilliant mind, as her way of thinking and seeing Americas problem with racism is uninhibited by native or wishful thinking. But instead acknowledges the emotional, economical and historical complexities of racism and its interpersonal manifestations. This is perfectly exemplified in both Lee’s characters Jean-Louis and Atticus Finch.
I wouldn’t say Atticus Finch falls from grace in this book, in fact I loved and  respect him so much more in this book. Lee presents him to be a very progressive, compassionate and loving man and father, who still deserves the admiration and respect the first book creates for him. But we do come to see the full depth of his character, and while Atticus is still miles ahead of his contemporises in his thinking, racism is not simply about intelligence (or lack of) but is ingrained in the very individualised society of the United States.

What I gained from Lee’s text is how, for the South, racism is a mechanism used when their way of life is being threatened. A way of controlling something when it is felt that control has/is been lost. A highly paradoxical statement but one that very much coincides with the current reactions to the pressures to remove the Confederate flag from state buildings.

Go Set a Watchman shows how racism isn’t black and white but the grey areas in between. Even sweet Scout shows subtle racist tendency’s, like the singing of the racist version of ‘eenie meenie miney mo’, or her support of the preserving of Southern ways. I very much doubt many people will pick up on these but they do to stand to highlight how racism is ingrained into the very fabric of American society (to varying degrees), and how the most well-meaning and sincerest of white people can still be racist.

Harper Lee has proven again to be a brilliant and shrewd mind. And her latest offering goes beyond that of her first. I feel the release of this book could not have been more perfectly time, that it stands to engage with discussions of race and racism as we know and understand it today. And that had it been released earlier its brilliance may not have been fully understood.

Go Set a Watchman is without a doubt a must read. It is also most worthy of a place on the school curriculum, like that held by Lee’s first book To Kill a Mockingbird.
I would also highly recommend the audiobook which is narrated eloquently by Nashville, Tennessee native Reese Witherspoon.
Labels: Book Review Popular Culture Racism