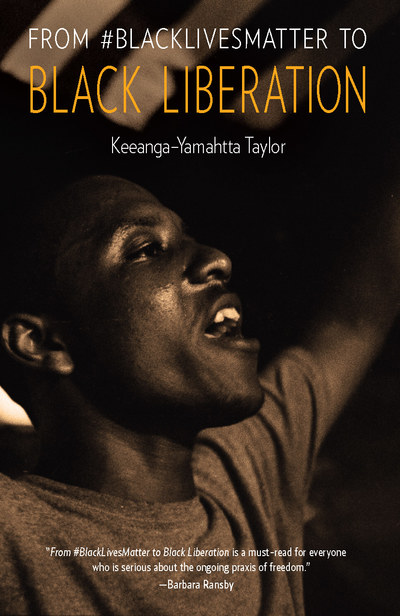 "Every movement needs a catalyst, an event that captures people's experiences and draws them out of their isolation into a collective force with the power to transform social conditions."

From #BLACKLIVESMATTER to Black Liberation is an intricate discussion of Black political movements past and present. It explores the myriad intersecting social and political issues which have attempted to assuage Black resistance and derail racial progress. While Taylor forsakes the necessity of outlining her methodology approach, necessary for an academic, I would assume its absence was intentional and an indicator that the book is intended to serve a wider audience. Taylor, instead, explains that the intention of the book is to explore ‘why the movement marching under the banner of Black Lives Matter has emerged under the nation’s first Black president’. Furthermore, Taylor statement that ‘it is almost never useful to compare eras’ acts, in some ways, as a warning to the books non-linear addressing of past Black movements as she skillfully navigates us back and forth in time to provide an insightful reading of a history of America’s racial resistance movements.

For Taylor, the struggle African Americans face is economical and born out of capitalism racist actions of 'plunder, conquest, and slavery.' And explains that the economic system of capitalism thrives ‘on the exploitation of the many by the few’ and that racial ‘oppression is used to justify, “explain”, and make sense of rampant inequality.' This seems to be the underlining basis to which Taylor’s argument is founded on and is artfully woven into her critical reflection of history, where for example, it is highlighted how the implementation of certain government policies have stood to affirm the state's position as regulator and protector of American capitalism. An example of this being in the actions of President Johnson’s administration in the passing of legislation to expand the welfare state to include social programs such as ‘job training, housing, food stamps, and other forms of assistance.’ According to Taylor, this ‘inadvertently helped to define Black inequality as primarily an economic question’ and would ultimately contribute to the “welfare queen” stereotype which depicts lower class Blacks as lazy and exploiting state aid.

According to Taylor the subject of class is essential to any understanding of race relations in the United States. While class differences within the African American community have always existed Taylor explains that ‘the absence of formal barriers to Black economic and political achievement’ −as exemplified by the visibility of a small group of Black elites− ‘has allowed for more differentiation among African Americans [...which has] frayed notions of “community”’ and stood to affirm ‘the premise that Black inequality is a product of the slackening of… work ethics and self-sufficiency.' It is in this context that Taylor explains the election of Barack Obama as 'heralded as the pinnacle of Black achievement’. It becomes appropriate to acknowledge here, that according to Taylor, while the Black elite represents a small section of the African Americans population the size of this group becomes less important than the fact that their existence vindicates American capitalism of working against Black people.

While it is understood that there ‘have been many changes in Black life, politics, and culture over the years ‘the threat and reality of police surveillance, scrutiny, violence, and even murder has remained remarkably consistent.' And that conveniently, the “colorblind” era –which we may have seen come to an end, and to which Taylor recognise as a reaction to the post-Civil Rights Movement− prompted the reframing of racist political language and the repackaging of anti-Black political ideologies have led to an assault on Black lives through racially bias government policies. Going back further in time, it is explained that by the 1970s Black movement colorblind politics was used to ‘explain the retreat from public expenditure as a consequence of moral decay and the rise of criminality in the “inner-city”’ and that under the guise of a “culture of poverty” President Nixon and his cabinet shrunk welfare while increasing the policing state in response to ‘the “unruly” Black population’. Furthermore, new powers enacted by the Nixon administration, such as the 1970 RICO act (Racketeer Influenced and Corrupt Organizations Act), allowed for more than a thousand activists to be subpoenaed and forced journalists, Black Panthers, and Puerto Rican nationalists ‘to testify in grand jury hearings that were nothing but fishing expeditions’. Though it would, however, set a dangerous precedence in the use of policing and surveillance as a method of social subordination. And since 1971 ‘the prison population in America has risen by 700 percent.’ ‘”Blacks are stopped, searched, arrested and imprisoned at rates higher than people of other races”’ not to mention state courts extort their Black population (such as the case in Ferguson) for ‘monies derived from fees and fines’ which ‘is considered a perfectly acceptable practice.'

Tayor closes the book by thinking about the ingenuity of the Black Lives Matter movement in that it embodies new ways of organising which reject former Civil Rights strategies of a centralised (male) figureheads. Though Tayor isn't fully optimistic about the movement, instead one can read some trepidation towards the movement's future especially if it fails to ultimately align itself with economic and labour issues. But what is sure is that Black Lives Matter is the movement we need right now. And this book, if anything, stands to explain why.
Labels: Black Lives Matter Book Review Politics Race and Identity Racism