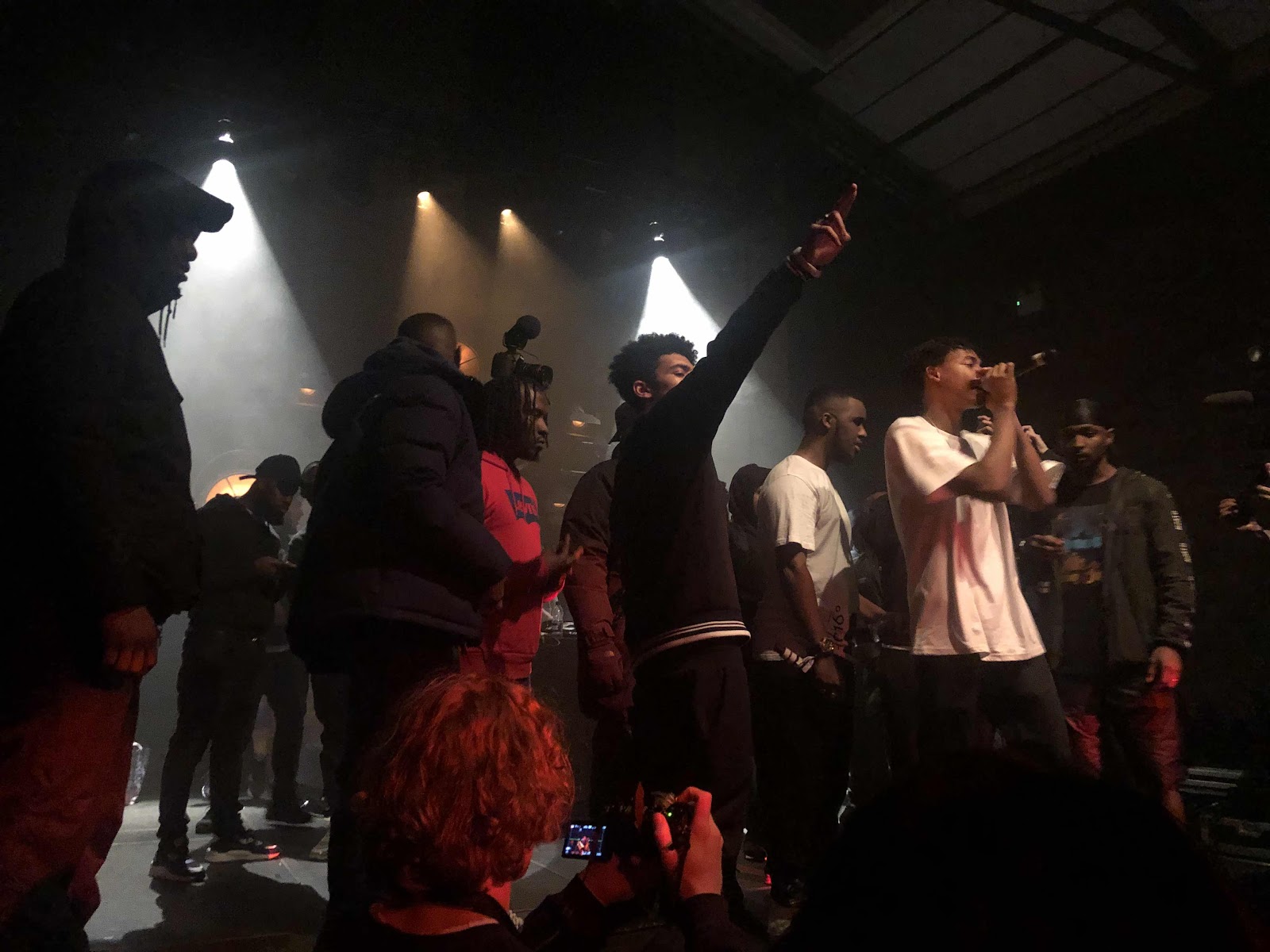 Grime may be getting the mainstream recognition deserved with breakout artists like Novelist. Though, there is nothing solo about grime’s recognized solo acts! Headlining what looked like a sold out show at Shoreditch's quirky 'turn-of-the-century warehouse' venue, Village Underground, Novelist took to the stage with friends and 'special guests' in tow. Absolved of conventional concert etiquettes --no merchandise was sold (in fact free t-shirts were given out), there was no encore, no breaks in the set, even the 'warm up acts' blended into the main act-- Novelist performed an hour and a half long high energy set, to a predominately white creative-class audience.

Opening the show, a group of young men took to the stage dressed in all black sweats, wearing ski-masks, and with drinks, phones and mics in tote. Most of the masked men congregated in the corner of the stage, making it clear that they weren't there to perform. As for those who did perform, they revealed their faces upon receiving the mic. This was how Novelist chose to make his grand entrance. Face concealed by a black bandana, Novelist blended in amongst a throng of masked men that had accumulated on stage, revealing himself only when ready to take the mic.

While Novelist did not disappoint, performing track after track from his impressively extensive list of hits, it seemed evident that the night was about more then just one man. The revealing of identities developed into a procession and to the audience's delight recognizable faces such as Big Zuu and JME were revealed. Novelist generously gave his friends time on the mic to spit bars and perform their hits. Feeding off of one another's energies, jumping, bouncing, dancing, pushing and shoving were endorsed on stage and emulated by the crowd below them. As was gun finger salutes. The atmosphere and energy was so high that even Novelist was thrown off by it at times. Misstepping beats and lyrics to songs quickly prompted rewinds or a cappellas, which added to the organic quality of the experience we were engulfed in.

The next day, I showed video clips I had recorded to my mother. She made a interesting comment about the differences in sound system culture of the 70s and 80s compared to today that stuck with me. It was essentially about focus, or more who/what was the focus of the night. For her the video clips of a crowded stage obscured her view of the DJ and the decks, which once served as the heart of a dance pumping out sonic vibrations. In popular music culture, the place of the MC as sidekick to the DJ has long since shifted to center stage. Though, on that crowded stage with a sea of black bodies dressed mostly in black, passing the mic around and bouncing and jumping out of sync with both the DJ and the sound, who or what was the audience to focus on?

Admittedly, Novelist removed his black sweat top once he got hot (as did some of the others), revealing a white t-shirt underneath. This worked well to distinguish him from his entourage, though it also made his absences from view more apparent. Lingering on this question of focus, Novelist's unwillingness to take center stage, as well as his extemporaneous performance, insists we read the performance in new and different ways. As, if the performance was not about the billed artist or his sound then what gets left on the stage is the throng of black men getting hyped and connecting with one another through the act of speech and touch.

This may actually be a useful aspect of the performance to unpack. I found myself particularly compelled by the dress code on stage —black sweat suits and ski-masks, which was occasionally mixed in with black shorts, hoodies and padded coats (with the exception of one person who clearly missed the memo and came in blue denim and a Burberry check shirt!)— which further blackened these young black male bodies, as well as obscure their identities encouraging "sameness". There was also an ominous feel to the way they were dressed which can only be assumed as intentional. The concealing of ones face behind masks has become prevalent within UK Drill music. This is understood as being in response to the State‘s over surveillance of genre, on the belief that it incites violence. Alternatively, we can also read it as a form of costume or masquerade, something akin to the spirit of JabJab or Jab Molassi. 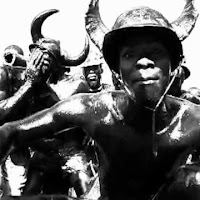 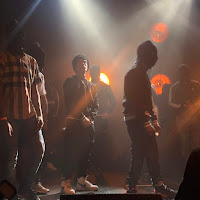 For those unfamilar with Jab (meaning devil), it is one of the many masquerade themes performed at carnivals across the Caribbean. A tradition traceable back to slavery, JabJab is a decorative form of masquerade that was intended to mock or parody white planters. Jab Molasses, on the other hand, is about painting the body in oil, tar, or in the slave emancipation era molasses and sot. They can also wear masks and horns, blow whistles and carry pitch folks (Mason: 1998). Jab Molasses is an amalgamation of ancient African spiritualism, rebellion (molasses is a byproduct of sugar production) and jubilation. Jab was and still is about claiming space under racist occupation and celebrating black resilience.

A similar spirit could be read in the way Novelist inhabited the stage and claimed the space. There was definitely an intimacy to what had occured on stage. While the crowd was regularly addressed, there was also a subtle feeling of being spectators to a private party. A party made up exclusively by young black men —coincidently, the traditions of Jab begins as an exclusively male affair. Whatever our role as audience was relegated to serve, the sheer energy that radiated off the stage was electric. It was without a doubt the pulse of the night and what carried us through an unscripted event. Almost empathetically, the performance enduced a collective feeeling of pride, excitement and success. It was about being present and dwelling in the moment. A sentiment which parallels that expressed by grime artist Jammer who said, when speaking about grime, that: "I look at it [music] like, where I was and how I felt" (Red Bull: 28.08.2019).

I had not expected to enjoy myself as much as I did, the feeling really was infectious. Though, while I may have take some pleasure in witnessing young black men taking up space in a London area that, decades before, violently expelled them from its residence. I also wonder what pleasures these black bodies gave the white majority audience? How were they seeing them? What where they taking from them? And, what where they giving back, besides the monetary demand of attending the event? In our politically divisive times, it’s questions like these that haunt me when seeing the popularity and significance of grime on the national culture.
Labels: black men Black Popular Culture concert grime jab molasses jabjab London Music performance